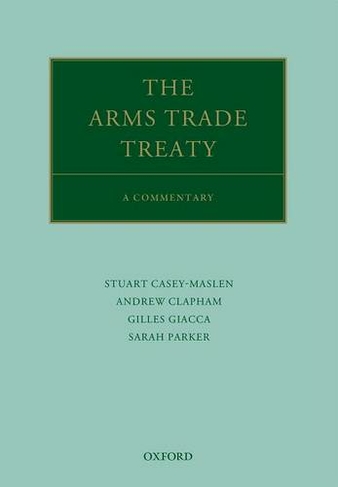 The Arms Trade Treaty: A Commentary

Also available on eBook for £123.35. Click here to purchase from Rakuten Kobo

The United Nations Arms Trade Treaty became binding international law in late 2014, and although the text of the treaty is a relatively concise framework for assessing whether to authorize or deny proposed conventional weapons transfers by States Parties, there exists controversy as to the meaning of certain key provisions. Furthermore, the treaty requires a national regulatory body to authorize proposed transfers of conventional weapons covered by the treaty, but does not detail how such a body should be established and how it should effectively function. The Arms Trade Treaty: A Commentary explains in detail each of the treaty provisions, the parameters for prohibitions or the denial of transfers, international cooperation and assistance, and implementation obligations and mechanisms. As states ratify and implement the Treaty over the next few years, the commentary provides invaluable guidance to government officials, commentators, and scholars on the meaning of its contentious provisions. This volume describes in detail which weapons are covered by the treaty and explains the different forms of transfer that the Arms Trade Treaty regulates. It covers international human rights, trade, disarmament, humanitarian law, criminal law, and state-to-state use of force, as well as the application of the treaty to non-state actors.