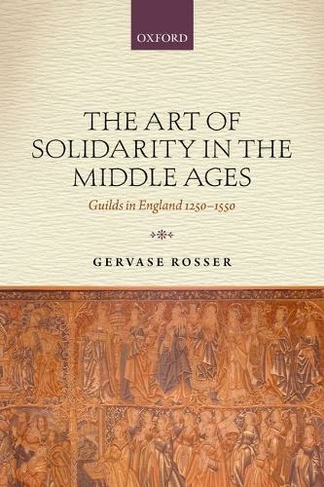 Guilds and fraternities, voluntary associations of men and women, proliferated in medieval Europe. The Art of Solidarity in the Middle Ages explores the motives and experiences of the many thousands of men and women who joined together in these family-like societies. Rarely confined to a single craft, the diversity of guild membership was of its essence. Setting the English evidence in a European context, this study is not an institutional history, but instead is concerned with the material and non-material aims of the brothers and sisters of the guilds. Gervase Rosser addresses the subject of medieval guilds in the context of contemporary debates surrounding the identity and fulfilment of the individual, and the problematic question of his or her relationship to a larger society. Unlike previous studies, The Art of Solidarity in the Middle Ages does not focus on the guilds as institutions but on the social and moral processes which were catalysed by participation. These bodies founded schools, built bridges, managed almshouses, governed small towns, shaped religious ritual, and commemorated the dead, perceiving that association with a fraternity would be a potential catalyst of personal change. Participants cultivated the formation of new friendships between individuals, predicated on the understanding that human fulfilment depended upon a mutually transformative engagement with others. The peasants, artisans, and professionals who joined the guilds sought to change both their society and themselves. The study sheds light on the conception and construction of society in the Middle Ages, and suggests further that this evidence has implications for how we see ourselves. 8 black and white illustrations

Gervase Rosser read history at Oxford University before studying art history at the Courtauld Institute of Art. He has taught medieval history and art history in the Universities of Birmingham and Oxford. His research stems from his interest in how and why communities are formed. His doctoral research in London was published as Medieval Westminster 1200-1540 (1989), which was awarded the Whitfield Prize. He has since worked extensively on guilds in medieval Englandand Europe, with particular attention to their social functions. He has most recently researched and published, jointly with Jane Garnett, a book on cults of images thought to be miraculous, and how such cults can catalyse community: Spectacular Miracles. Transforming Images in Italy from theRenaissance to the Present (2013).