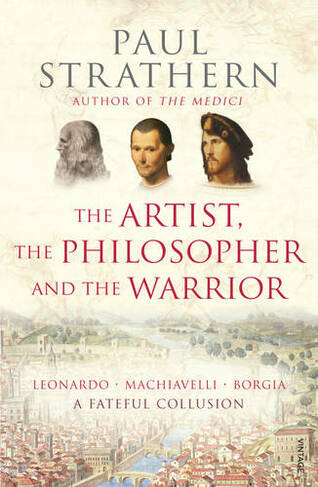 The Artist, The Philosopher and The Warrior

In the autumn of 1502 three giants of the Renaissance period - Cesare Borgia, Leonardo da Vinci and Niccolo Machiavelli - set out on one of the most treacherous military campaigns of the period. Cesare Borgia was a ferocious military leader whose name was synonymous with brutality and whose reputation was marred with the suspicion of incest. Niccolo Machiavelli was a witty and subversive intellectual, more suited to the silken diplomacy of royal courts than the sodden encampments of a military campaign. And Leonardo da Vinci was a visionary master and the most talented military engineer in Italy. What led him to work for the monstrous Borgia? And what attracted him to the cunning Machiavelli? In his extraordinary new book acclaimed historian Paul Strathern ingeniously focuses on this improbable collusion of three iconic figures of the Italian Renaissance to unite three mighty strands of the period - war, politics and art. As each man's life unfolds, so does the Italian Renaissance.

Paul Strathern studied philosophy at Trinity College, Dublin. He has lectured in philosophy and mathematics. He is a Somerset Maugham Prize-winning novelist; author of two series of books - Philosophers in 90 Minutes and The Big Idea: Scientists who Changed the World; Mendeleyev's Dream (shortlisted for the Aventis Science Book Prize); Dr. Strangelove's Game: A History of Economic Genius, The Medici: Godfathers of the Renaissance; Death in Florence: The Medici, Savonarola and the Battle for the Soul of the Renaissance City and The Spirit of Venice.