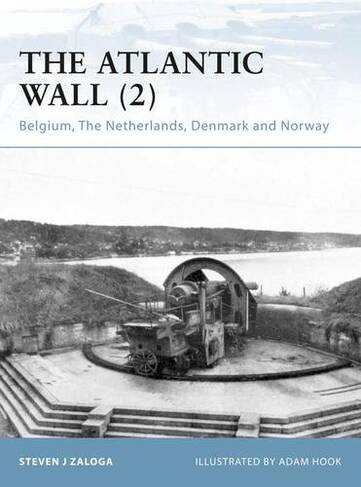 The Atlantic Wall (2): Belgium, the Netherlands, Denmark and Norway (Fortress No. 89)

By Steven Zaloga (Author), Adam Hook (Illustrator)
Paperback
https://www.whsmith.co.uk/products/the-atlantic-wall-2-belgium-the-netherlands-denmark-and-norway-fortress-no-89/steven-zaloga/adam-hook/paperback/9781846033933-01-000.html £11.95 rrp £12.99 Save £1.04 (8%)
GBP
Availability
Currently unavailable. We don't know when or if this item will be back in stock
Free Saver Delivery on orders over £20
Details
FREE SHIPPING over £20 for Saver Delivery
Share

Germany's Atlantic Wall was the most ambitious military fortification program of World War II. Following its conquest of Western Europe, Germany had to defend some 5,000km of Atlantic coastline from the Spanish border to the Arctic Circle. The United States' entry into the war and the inevitability of an Anglo-American landing in Western Europe resulted in the fortification of this coastline along its entire length. Focusing on the northern Atlantic Wall in the Low Countries and Scandinavia, this title addresses the special defensive features and unique aspects of fortification in these countries, such as the early focus on fortifying Norway, due to early British commando raids; the greater use of turreted naval guns; and, the establishment of first-line Flak defences in the Low Countries to counter the Allied strategic bombing campaign. Illustrations (chiefly col.)

Steven J. Zaloga received his BA in history from Union College and his MA from Columbia University. He has worked as an analyst in the aerospace industry for over two decades, covering missile systems and the international arms trade, and has served with the Institute for Defense Analyses, a federal think-tank. He is the author of numerous books on military technology and military history, with an accent on the US Army in World War II as well as Russia and the former Soviet Union. The author lives in Abingdon, Maryland.