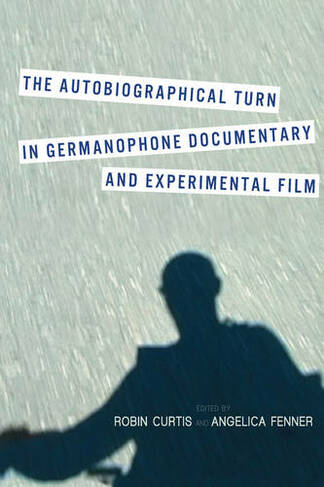 The Autobiographical Turn in Germanophone Documentary and Experimental Film

By Robin Curtis (Author), Angelica Fenner (Author)
Hardback
https://www.whsmith.co.uk/products/the-autobiographical-turn-in-germanophone-documentary-and-experimental/robin-curtis/angelica-fenner/hardback/9781571139177-01-000.html £85.50 rrp £90.00 Save £4.50 (5%)
GBP
Availability
Currently unavailable. We don't know when or if this item will be back in stock
Share

There is a widespread notion in the scholarly literature on autobiographical nonfiction film that there are unchanging, universal models for the investigation of the self through audiovisual media. By insisting on the cultural and historical specificity of that self, the essays in this volume trace the range of politically and theoretically informed taboos, critiques, and proclivities that shape autobiographical filmmaking in German-speaking countries. In doing so, they delineate a new model for contemplating autobiographical film and video. The essays in this volume examine the parameters shaping the audiovisual self in the Germanophone cultural context across a variety of practices and aesthetic modes, from contemporary artists including Hito Steyerl, Ming Wong, and kate hers to Rolf Dieter Brinkmann's multimedia experiments of the 1970s, and from Helke Misselwitz's challenges to the documentary tradition in the GDR to Peter Liechti's investigations of Swiss ambivalence toward the nation's iconic landscape. The volume thus takes up a number of historically and geographically specific iterations of autobiographical discourse that in each case remain contingent on the space and time in which they are uttered. Contributors: Dagmar Brunow, Steve Choe, Robin Curtis, Tobias Ebbrecht-Hartmann, Angelica Fenner, Marcy Goldberg, Feng-Mei Heberer, Rembert Huser, Waltraud Maierhofer, Christopher Pavsek, Patrik Sjoeberg, Carrie Smith-Prei, Anna Stainton. Robin Curtis is Professor of Theory and Practice of Audiovisual Media at the Heinrich-Heine-University in Dusseldorf, Germany. Angelica Fenner is Associate Professor of German and Cinema Studies at the University of Toronto.