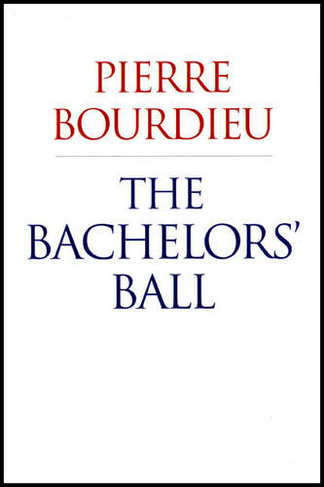 The Bachelors' Ball The Crisis of Peasant Society in Bearn

Continuing the theme of self-reflection, Bourdieu's final book, "The Bachelors' Ball", sees him return to Bearn, the village where he grew up, to examine the gender dynamics of rural France. This personal connection adds poignancy to Bourdieu's ethnographic account of the way the influence of urban values has precipitated a crisis for male peasants. Tied to the land through inheritance, these bachelors find themselves with little to offer the women of Bearn who, like the young Bourdieu himself, abandon the country for the city in droves. 9 halftones, 1 line drawing, 20 tables

Over the past four decades, French sociologist Pierre Bourdieu produced one of the most imaginative and subtle bodies of social theory of the postwar era. When he died in 2002, he was considered the most influential sociologist in the world and a thinker on a par with Foucault and Levi-Strauss - a public intellectual as important to his generation as Sartre was to his. Pierre Bourdieu (1930-2002) was professor of sociology at the College de France. He is the author or coauthor of more than twenty works, including Distinction, Homo Academicus, Pascalian Meditations, On Television, State Nobility, Acts of Resistance, An Invitation to Reflexive Sociology, and Science of Science and Reflexivity, the last two also published by the University of Chicago Press.