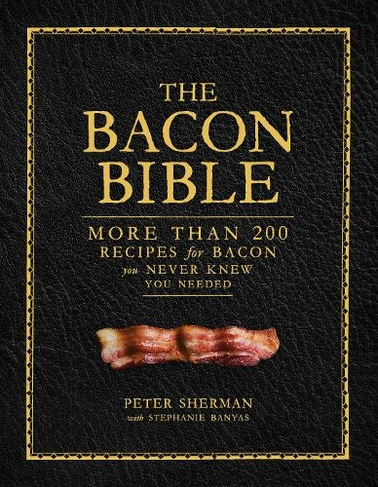 Also available on eBook for £17.51. Click here to purchase from Rakuten Kobo

Bacon is Peter Sherman's north star. In 2014, he opened BarBacon, a bacon-themed gastropub in New York City, to immediate critical and financial success, and he has become the go-to bacon guru for the world. He has a nearly religious devotion to bacon, and in his tome, The Bacon Bible, he shares more than 150 recipes that show you how to incorporate bacon into nearly any meal you can imagine. There are the classics, like BLTs, wedge salads, and mac and cheese, but the book really encourages you to cook with bacon in unexpected ways. There's Bacon Ramen, Chipotle Bacon Tacos, and Bacon Bourbon Oatmeal Pancakes. Peter also teaches you the basics, like how to cure simple bacon from scratch. He has a mad-scientist approach to bacon and is a firm believer that it should be a part of every meal.

Peter Sherman is the owner of BarBacon, a bacon-themed gastropub in New York City. Peter spent the last decade cooking in some of the best kitchens in the world: Joel Robuchon's L'Atelier, David Bouley's Danube, and April Bloomfield's Breslin. He lives in New York City. Stephanie Banyas is a writer and recipe developer, and has been Bobby Flay's business assistant since 1997. She is a graduate of the French Culinary Institute, and has co-authored Flay's eight most recent cookbooks, including Bobby Flay's Mesa Grill Cookbook, Brunch at Bobby's, and Bobby Flay's Throwdown!. Banyas lives in New York City.