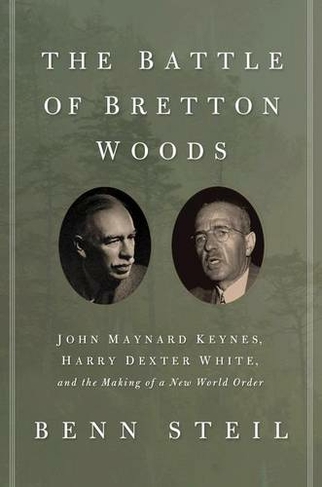 The Battle of Bretton Woods John Maynard Keynes, Harry Dexter White, and the Making of a New World Order

When turmoil strikes world monetary and financial markets, leaders invariably call for 'a new Bretton Woods' to prevent catastrophic economic disorder and defuse political conflict. The name of the remote New Hampshire town where representatives of forty-four nations gathered in July 1944, in the midst of the century's second great war, has become shorthand for enlightened globalization. The actual story surrounding the historic Bretton Woods accords, however, is full of startling drama, intrigue, and rivalry, which are vividly brought to life in Benn Steil's epic account. Upending the conventional wisdom that Bretton Woods was the product of an amiable Anglo-American collaboration, Steil shows that it was in reality part of a much more ambitious geopolitical agenda hatched within President Franklin D. Roosevelt's Treasury and aimed at eliminating Britain as an economic and political rival. At the heart of the drama were the antipodal characters of John Maynard Keynes, the renowned and revolutionary British economist, and Harry Dexter White, the dogged, self-made American technocrat. Bringing to bear new and striking archival evidence, Steil offers the most compelling portrait yet of the complex and controversial figure of White--the architect of the dollar's privileged place in the Bretton Woods monetary system, who also, very privately, admired Soviet economic planning and engaged in clandestine communications with Soviet intelligence officials and agents over many years. A remarkably deft work of storytelling that reveals how the blueprint for the postwar economic order was actually drawn, The Battle of Bretton Woods is destined to become a classic of economic and political history. 32 halftones.

Benn Steil is senior fellow and director of international economics at the Council on Foreign Relations. His previous book, Money, Markets, and Sovereignty, was awarded the 2010 Hayek Book Prize.