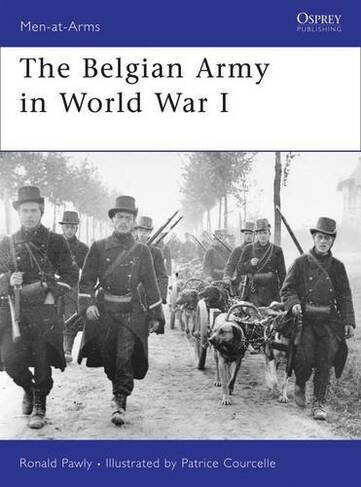 By Ronald Pawly (Author), Patrice Courcelle (Illustrator)
Paperback
https://www.whsmith.co.uk/products/the-belgian-army-in-world-war-i-menatarms-no-452/ronald-pawly/patrice-courcelle/paperback/9781846034480-01-000.html N/A
GBP
Availability
Currently unavailable. We don't know when or if this item will be back in stock
Free Saver Delivery on orders over £20
Details
FREE SHIPPING over £20 for Saver Delivery
Share

While small in numbers, the Belgian Army played a vital role in World War 2 that is often overlooked. Germany's invasion of neutral Belgium, which led Britain to declare war in August 1914, should have been swift and fierce yet the unexpected heroic defence, against great odds, of Belgian fortresses, frustrated the German Schlieffen Plan for a thrust to Paris and a lightning victory. The plucky Belgian resistance proved successful in buying time for French and British troops to mobilize and report to the front, where the Belgians would then go on to fight, stubbornly defending the northern end of the Allied trench line for the rest of the war. In this work, discover the story of this determined Army, from their organization and commanders, to their uniforms and equipment. The only main combatant army of World War I not previously covered by Osprey, this volume will be an important addition to any enthusiast's collection, accompanied by detailed artwork and archive photographs. Illustrations (some col.)

Ronald Pawly was born in Belgium in 1956 and still lives and works there. He is a respected member of several societies for Napoleonic studies and an expert on 19th century military portraiture. He has previously written for Osprey Men-at-Arms 355, Wellington's Belgian Allies 1815; MAA 371, Wellington's Dutch Allies 1815; MAA 371, Napoleon's Red Lancers; MAA 378, Napoleon's Guards of Honour; and Elite 115, Napoleon's Imperial Headquarters (1). Although, a leading Napoleonic historian, Ronald Pawly has also always been fascinated by the First World War and has heavily researched the Belgian involvement in such a conflict.