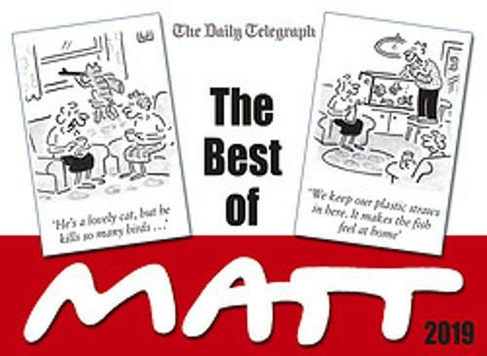 The best of the best! Award-winning cartoonist Matt looks back at the last 12 months in his own hilariously entertaining style - the perfect Christmas gift for everyone! 'Matt is an Adorable Genius' Jilly Cooper Whether you want to laugh or cry about the last twelve months, Matt gives a brilliantly funny take on the world. From Brexit to business, Trump to transport woes, our obsession with the weather to Royal babies, Matt nails it every single time with just the right visual joke. There is no doubt: Matt definitely makes the world a happier place! 'So much greater than his nearest rivals it's almost embarrassing' Stephen Fry

Matt studied at St Martin's School of Art in London and first saw himself published in the New Statesman during one of its rare lapses from high seriousness. He has been the Daily Telegraph's pocket cartoonist since 1988. He was 'WHAT THE PAPERS SAY' CARTOONIST OF THE YEAR three times and is also five times winner of the UK PRESS GAZETTE CARTOONIST OF THE YEAR. He has won the CARTOON ARTS TRUST POCKET CARTOONIST OF THE YEAR AWARD six times, most recently in 2013, and in 2002 he received an MBE.