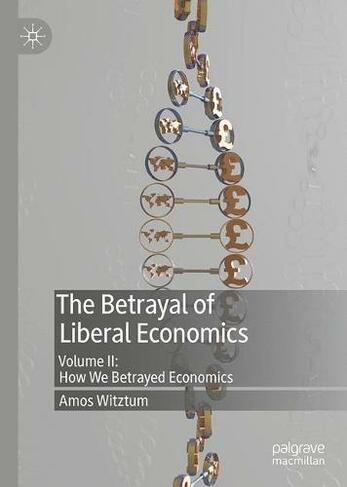 The Betrayal of Liberal Economics: Volume II: How We Betrayed Economics (1st ed. 2019)

The presumed sovereignty of individuals and the facilitating powers of the markets have generated a universal and ethically neutral conception of both social and economic organisation. This ground-breaking text re-examines the purpose of society and the role of economics in it, arguing that the absence of a beneficial natural order calls for the role of the collective in social and economic life to be revisited. Drawing on some key figures marking milestones in the evolution of social and economic thinking, the author offers a critique of mainstream economics as a way of thinking and as a provider of guiding principles for economic and social organisation. Whilst Volume I looks at how economics' paradigmatic core betrayed us by its false promise, Volume II begins to consider whether the current status quo may in fact be a result of the way in which the academic community have instead betrayed economics. Starting with an exploration into the nature of human sociality and what the notion of the 'individual' means in both liberal classical and modern economics, the author moves on to address the organisational implications of these conclusions using the concept of 'social distance'. He then considers whether modern economics can accommodate such sociality whilst maintaining the same organisational principle of competitive decentralisation as the universal recipe for economic organisation. The text concludes by examining whether the fault can be found in the misconception of modern economics as a linear intellectual progression from liberal classical economics. This is done through a novel re-examination of liberal classical economics by developing Adam Smith's theory to answer such questions. This is a bold and foundational new work that offers an original and innovative perspective on economics and its challenges, addressing core areas such as behavioural economics, evolutionary game theory and links between social sciences (anthropology, philosophy) and neurosciences. 42 Illustrations, color; 7 Illustrations, black and white; XI, 434 p. 49 illus., 42 illus. in color.

Amos Witztum is a professor of economics who is currently a Research Associate at the Centre for the Philosophy of Natural and Social Sciences at the London School of Economics and Political Sciences, UK.