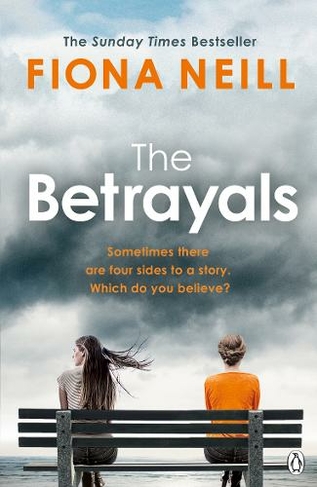 By Fiona Neill (Author)
Paperback
The Betrayals is rated 3.0 out of 5 by 1.
https://www.whsmith.co.uk/products/the-betrayals/fiona-neill/paperback/9781405923453-03-000.html £3.99 rrp £7.99 Save £4.00 (50%)
GBP
Availability
In Stock
Free Delivery Available When You Spend £25 Or More
Details
Spend £25 on eligible products to receive free standard delivery to home or free next working day click and collect to store
Share

THE DEVASTATINGLY EXPLOSIVE RICHARD & JUDY PICK AND SUNDAY TIMES BESTSELLER None of them would forget that week on the wild Norfolk coast. Best friends Rosie and Lisa's families had always been inseparable. But that summer, Lisa had an affair with Rosie's husband Nick. And now, after years of silence, she sends Rosie a letter begging for help. A letter which exposes dark secrets. Daughter Daisy's fragile hold on reality begins to unravel. Teenage son Max blames himself for everything that happened that long hot summer. And Nick must confront his own version of events. There are four sides to this story. Who will you believe? ________ 'No one writes about modern family with more truth and authenticity than Fiona Neill' Lisa Jewell 'A rollicking read that should not be picked up at bedtime, or you'll be done for in terms of a good night's sleep' Stylist 'A vivid and insightful portrayal of a family in crisis. A writer at the top of her game' Gillian McAllister 'Thought-provoking and stands out from the crowd' Grazia

Rated 3 out of 5 by Reacherfan from Easy read Ok read...not too challenging for those times when a light read is required

Fiona Neill is an author and journalist who has written five Sunday Times bestsellers. Her last novel, The Betrayals, sold over 130,000 copies and was a Richard & Judy Book Club selection. Fiona worked as a foreign correspondent in Central America for six years and returned to the UK as assistant editor on Marie Claire before joining The Times Magazine as assistant editor. She has written features for many publications including The Times, Sunday Times Style, and the Telegraph Magazine as well as having written a screenplay of her first novel for the BFI. Fiona grew up in rural North Norfolk and lives in London with her husband and three children.