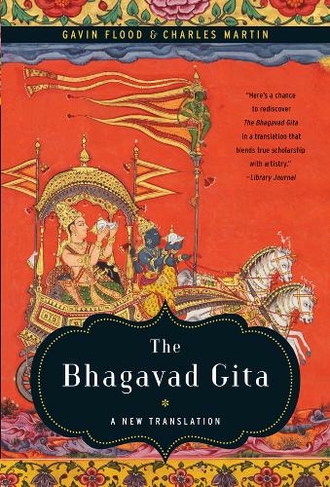 The Bhagavad Gita: A New Translation

By Gavin Flood (Contributor), Charles Martin (Contributor)
Paperback
£9.19 rrp £9.99 Save £0.80 (8%)
GBP
Availability
In Stock
Free Delivery Available When You Spend £15 Or More
Details
Spend £15 On Products To Receive Free Standard Delivery To Your Home Or Free Next Day Click and Collect To Stores
Share

This new verse translation of the classic Sanskrit text combines the skills of leading Hinduist Gavin Flood with the stylistic verve of award-winning poet and translator Charles Martin. The result is a living, vivid work that avoids dull pedantry and remains true to the extraordinarily influential original. A devotional, literary, and philosophical masterpiece of unsurpassed beauty and imaginative relevance, The Bhagavad Gita has inspired, among others, Mahatma Gandhi, J. Robert Oppenheimer, T. S. Eliot, Christopher Isherwood, and Aldous Huxley. Its universal themes-life and death, war and peace, sacrifice-resonate in a West increasingly interested in Eastern religious experiences and the Hindu diaspora.

Gavin Flood is Professor of Hindu Studies and Comparative Religion and Academic Director of the Centre for Hindu Studies at Oxford University. He is the author of An Introduction to Hinduism; The Ascetic Self: Subjectivity, Memory, and Tradition; and The Tantric Body: The Secret Tradition of Hindu Religion. Charles Martin was born in New York City in 1942. He earned a Ph.D. in English from the State University of New York at Buffalo. The recipient of numerous awards, Martin has received the Bess Hokin Prize, the Literature Award from the American Academy of Arts and Letters, and fellowships from the National Endowment for the Arts and the Ingram Merrill Foundation. Three of his poetry collections-Steal the Bacon (1987), What the Darkness Proposes (1996), and Starting from Sleep: New and Selected Poems (2002)-have been nominated for the Pulitzer Prize. His translation of Ovid's Metamorphoses won the 2004 Harold Morton Landon Translation Award from the Academy of American Poets.