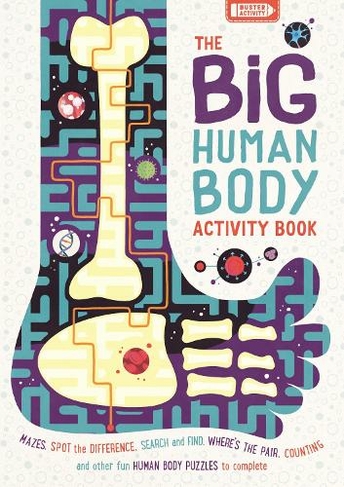 Part of Buster's brand-new 'Big Activity Book' series and packed with 70 puzzles and games, The Big Human Body Activity Book is bursting with fun and fact-filled activities for inquisitive kids. This innovative activity book includes brain-training memory games, intestine mazes, spot-the-difference searches, odd-one-out puzzles and so much more. Each puzzle explores a different part of the body and includes lots of fun facts to discover along the way. Children can find out about everything from where to find the smallest bone in the body to when you are most likely to need a poo. Other books in the series: 9781780556093 The Big Green Activity Book 9781780556314 The Big Animal Activity Book Full colour

Rhys Jefferys (Author) Rhys Jefferys is an illustrator from the south east of England, whose work focuses on the joyful and fun side of life. A keen traveller, he is currently exploring, drawing and being very cold in the coastal mountains of Canada.Georgie Fearns (Author) Georgie is a London-based illustrator, designer and storyboard artist. She originally specialised in fashion and lifestyle, but was soon drawn to the world of children's books. Georgie's titles include a range of celebrity children and crossover activity books, including Buster's bestselling Dress Up sticker book series.Marc Pattenden (Author) Marc is a self-taught illustrator from Lewes, East Sussex. As a child he drew endlessly, but it wasn't until his son was born that he rediscovered his love of doodling - both as a way to entertain his son, and as a source of entertainment for himself! Marc has since graduated from doodling and now works full time as an illustrator (although he would argue that there is very little difference between his doodling days and his present practice). He spends much of his time (fueled on strong tea) drawing silly pictures containing forlorn looking yetis, giant purple robots and the like.Ben Elcomb (Author) After a successful career working in television production on a variety of shows including ITV's This Morning, Britain's Got Talent and Ministry of Mayhem, and the BBC's reboot of The Basil Brush Show, Ben branched out into writing scripts for CBeebies' Something Special. Ben then went on to write Operation Ouch - The HuManual, a companion book to the multi BAFTA winning CBBC show Operation Ouch. Ben also provided the original content to the James & The Giant Peach spin-off book Roald Dahl's James' Giant Bug Book, which featured a range of fun activities and things to make with a bug and insect theme. As a father of two children, Ben continues to pursue his passion for writing entertaining and informative works for young audiences.