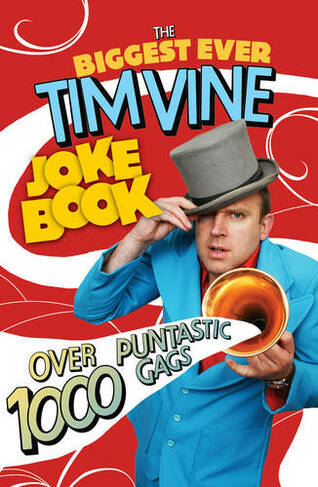 The irrepressible, hysterical, puntastical Tim Vine, star of stage and screen, treats all of us here in his first joke book. Packed full of zingers and hilarious illustrations, if this doesn't put a smile on your face, nothing will. What's not to like: The other day someone left a piece of plasticine in my dressing room. I didn't know what to make of it. I'm against hunting. I'm actually a hunt saboteur. I go out the night before and shoot the fox. I saw this bloke chatting up a cheetah. He was trying to pull a fast one. Black holes. I don't know what people see in them. So I fancied a game of darts with my mate. He said, 'Nearest the bull goes first.' He went 'Baah' and I went 'Moo'. He said 'You're closest.' Velcro. What a rip-off. Black Beauty. He's a dark horse. I've got a sponge front door. Hey, don't knock it. Black and white cartoons

Tim Vine burst onto the stand-up circuit by winning the Perrier Best Newcomer Award at the Edinburgh Festival in 1995 and has since gone on to find universal acclaim as the undisputed master of the one-liner.In 2004 Tim became the Guinness World Record Holder for telling the most jokes in an hour, smashing the previous record with a total of 499. He lives in London and is currently co-starring in the hit sitcom Not Going Out.