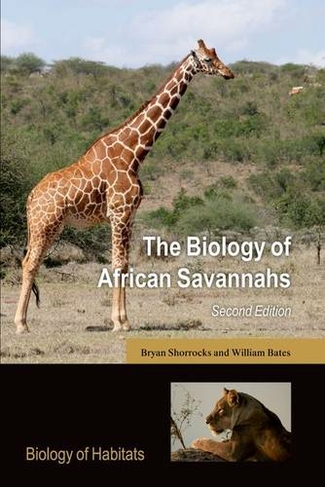 Also available on eBook for £35.27. Click here to purchase from Rakuten Kobo

Savannah habitats comprise an ecologically important, but ultimately fragile, ecosystem. They constitute one of the largest biomes on Earth, covering almost 20% of the land surface, and can be simply described as tropical and subtropical grasslands with scattered bushes and trees. Most savannahs occur in Africa, although smaller areas can be found in South America, India, and Australia. They form a rich mosaic of diverse ecosystems, and this book offers a concise but comprehensive introduction to their ecology, biodiversity, and conservation. The Biology of African Savannahs describes the major plants (grasses, and trees such as Acacia) and animals (mainly large mammals) that live in this habitat, and examines the biological and ecological factors that influence their population size, interactions (such as predation), and community composition. Conservation issues such as climate change, hunting, and conflict between wildlife and domestic animals are also discussed. This new edition has been updated throughout with the latest research in the field, and contains new technique boxes which introduce readers to some of the analytical methods used to study African savannahs. This accessible text is suitable for both senior undergraduate and graduate students taking courses in savannah and tropical ecology as part of a wider ecology and/or conservation biology degree programme. It will also be of relevance and use to the many professional ecologists and conservation practitioners requiring a concise but authoritative overview of the topic.

Bryan Shorrocks is an Honorary Professor in the Environment Department, University of York. He was previously Professor of Population Ecology at the University of Leeds, and is an Emeritus Professor of that University. For many years he was senior editor of the Journal of Animal Ecology, and for the past 5 years has been an editor for the African Journal of Ecology. He has twice been a member of the Council of the British Ecological Society, and has been on UKresearch committees for NERC and AFRC. He advises the Namibian Cheetah Project, is UK representative for the East African Wildlife Society, and is a Trustee of the East African Wildlife Trust. His current research at the Mpala Research Centre, in Laikipia, central Kenya focuses on reticulated giraffesin the region. He recently helped to supervise a giraffe project in Namibia, and was the script advisor for the Savannah programme in the BBC's 'Africa' series. During the last 26 years he has had 148 publications.William Bates studied initially at the University of Guelph followed by an MSc. in Zoology at the University of Western Ontario, and a Ph.D. in Zoology at University of Texas at Austin. He has held the following research positions: NSERC PostDoctoral Fellow at the University of Oxford, and Kyoto University, Assistant Professor at Carleton University 1989-1994, Research Scientist at Bamfield Marine Science Centre 1994-1999; Associate College Professor at Okanagan University College 1999-2005;Associate Professor at University of British Columbia 2005-2013; Emeritus Professor at University of British Columbia 2013-present. He has had over 50 publications and over $1 million in total of research support. He has had fourteen years of field work in Africa studying wildlifevocalizations.