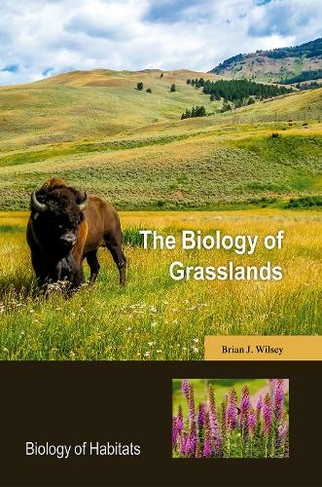 The Biology of Grasslands: (Biology of Habitats Series (BOHS))

This accessible text provides a concise but comprehensive introduction to the biology of global grasslands. Grasslands are vast in their extent, with native and non-native grasslands now covering approximately 50% of the global terrestrial environment. They are also of vital importance to humans, providing essential ecosystem services and some of the most important areas for the production of food and fibre worldwide. It has been estimated that 60% of calories consumed by humans originate from grasses, and most grain consumed is produced in areas that were formerly grasslands or wetlands. Grasslands are also important because they are used to raise forage for livestock, represent a source of biofuels, sequester vast amounts of carbon, provide urban green-space, and hold vast amounts of biodiversity. Intact grasslands contain an incredibly fascinating set of plants, animals, and microbes that have interested several generations of biologists, generating pivotal studies to important theoretical questions in ecology. As with other titles in the Biology of Habitats Series, the emphasis is on the organisms that dominate this environment although restoration, conservation, and experimental aspects are also considered. Over 50 illustrations

Brian Wilsey is a professor at Iowa State University, Ames, IA, USA. He has studied grassland ecology for the past 25 years, on topics ranging from global change effects on plant-grazer interactions, relationships between biodiversity and ecosystem functioning, species diversity maintenance, carbon and nutrient cycling, and community assembly. He has visited and worked in grassland systems around the world, including the tall and midgrass prairies of the centralU.S., savannah grasslands in Tanzania, steppe in China, and flooding Pampa of Argentina. He has published more than 80 scientific papers in peer reviewed journals on these and other topics.