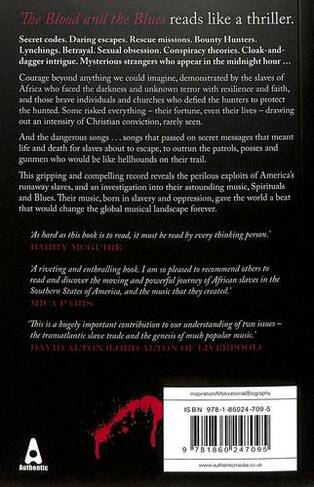 The Blood and the Blues

Secret codes. Daring escapes. Rescue missions. Bounty Hunters. Lynchings. Betrayal. Sexual obsession. Conspiracy theories. Cloak-and-dagger intrigue. Mysterious strangers who appear in the midnight hour ... Courage beyond anything we could imagine, demonstrated by the slaves of Africa who faced the darkness and unknown terror with resilience and faith, and those brave individuals and churches who defied the hunters to protect the hunted. Some risked everything - their fortune, even their lives - drawing out an intensity of Christian conviction rarely seen. And the dangerous songs ... songs that passed on secret messages that meant life and death for slaves about to escape, to outrun the patrols, posses and gunmen who would be like hellhounds on their trail. This gripping and compelling record reveals the perilous exploits of America's runaway slaves, and an investigation into their astounding music: Spirituals and Blues. Their music, born in slavery and oppression, gave the world a beat that would change the global musical landscape forever.

Danny Smith, Founder, Jubilee Campaign, Jubilee Action an organisation committed to ending injustice, childhood prostitution, and slavery. He is the author of Slavery: Then and Now.