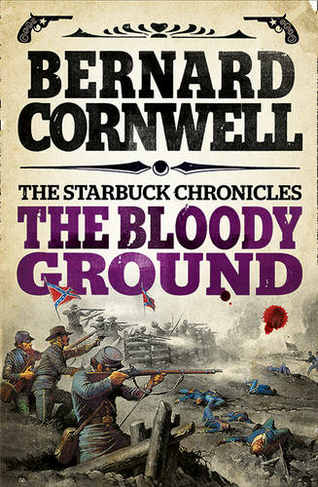 The Bloody Ground: (The Starbuck Chronicles 4)

By Bernard Cornwell (Author)
Paperback
https://www.whsmith.co.uk/products/the-bloody-ground-4/bernard-cornwell/paperback/9780007497959-12-000.html £8.19 rrp £9.99 Save £1.80 (18%)
GBP
Availability
In Stock
Free Delivery Available When You Spend £25 Or More
Details
Spend £25 On Eligible Products To Receive Free Standard Delivery To You Home Or Free Next Working Day Click And Collect To Store
Share

The fourth volume of Bernard Cornwell's bestselling series on the American Civil War and featuring rebel Nathaniel Starbuck - a yankee fighting for the Southern cause. It is late summer 1862 and the Confederacy is invading the United States of America. Nate Starbuck, a northern preacher's son fighting for the rebel South, is given command of a punishment battalion - a despised unit of shirkers and cowards. His enemies expect it to be his downfall, as Starbuck must lead this ramshackle unit into a battle that will prove to be the bloodiest of the Civil War.

Bernard Cornwell was born in London, raised in Essex and worked for the BBC for eleven years before meeting Judy, his American wife. Denied an American work permit he wrote a novel instead and has been writing ever since. He and Judy divide their time between Cape Cod and Charleston, South Carolina.