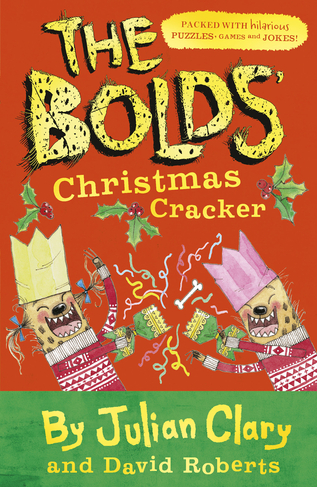 The Bolds' Christmas Cracker: A Festive Puzzle Book (The Bolds)

Enjoy a festive treat from Teddington's wildest family - packed with jokes, puzzles and activities! Who hides in the bakery at Christmas? A mince spy! What happened to the hyena who swallowed an Oxo cube? He made a laughing stock of himself! Merry Christmas! The Bolds are back with a bumper book of jolly japes. It's packed with rib-tickling jokes and puzzles including wordsearches, crosswords, mazes, riddles and spot the differences to keep kids entertained long after the Christmas presents are unwrapped! 2-colour illustrations throughout

Julian Clary (Author) Julian Clary is a comedian, entertainer and novelist, who has toured across the world with his one-man shows. Julian has appeared on numerous popular TV shows including Celebrity Big Brother (which he won) and Strictly Come Dancing. He has starred in West End productions and appears in panto most years. He lives in London with his husband.David Roberts (Illustrator) David Roberts is an award-winning illustrator. After graduating, he worked as a milliner and a fashion illustrator, but always felt his true calling was in children's books. He has collaborated with some of Britain's finest children's authors, including Julia Donaldson, Sally Gardner, Philip Ardagh and Jacqueline Wilson. He is also the creator of the popular Dirty Bertie books. He lives in London with his husband. He has been twice-shortlisted for the Kate Greenaway Medal, and in 2006 he won the Nestle Children's Book Prize Gold Award.