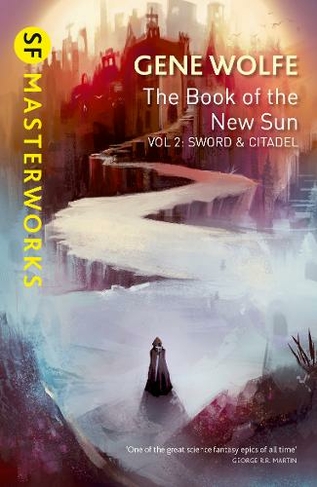 The Book of the New Sun: Volume 2: Sword and Citadel (S.F. Masterworks)

By Gene Wolfe (Author)
Paperback
https://www.whsmith.co.uk/products/the-book-of-the-new-sun-volume-2-sword-and-citadel/gene-wolfe/paperback/9781473212008-12-000.html £10.65 rrp £12.99 Save £2.34 (18%)
GBP
Availability
In Stock
Free Delivery Available When You Spend £25 Or More
Details
Spend £25 on eligible products to receive free standard delivery to home or free next working day click and collect to store
Share

An extraordinary epic, set a million years in the future, in the time of a dying sun, when our present culture is no longer even a memory. The torturer's apprentice, Severian, exiled from his guild after falling in love with one of his prisoners, is now the Lictor of Thrax, a city far distant from his home. But it is not long before Severian must flee this city, too, and journey again into the world. Embattled by friends and enemies alike, pursued by monstrous creatures, the one-time torturer's apprentice must overcome hitherto unimagined perils, as he moves closer to fulfilling his ultimate destiny. This edition contains the concluding two volumes of this four-volume novel, The Sword of the Lictor and The Citadel of the Autarch.

Gene Wolfe (1931-2019) Gene Wolfe was born in New York in 1931 and raised in Texas. After serving in the Korean War he graduated in mechanical engineering from the University of Houston and worked in engineering until becoming an editor of a trade periodical, Plant Engineering, in 1972. Following his retirement in 1984, he wrote full-time. The author of over three dozen award-wining novels and story collections, he is regarded as one of modern fantasy's most important writers. His best-known work, the four volume far-future Book of the New Sun, won the World Fantasy, BSFA, Nebula, British Fantasy and John W. Campbell memorial Awards. He won the World Fantasy Award four times for his novels and collections and the World Fantasy Life Achievement Award for his extraordinary body of work. Gene Wolfe lived in Illinois with his wife, Rosemary, until he passed away in April 2019.