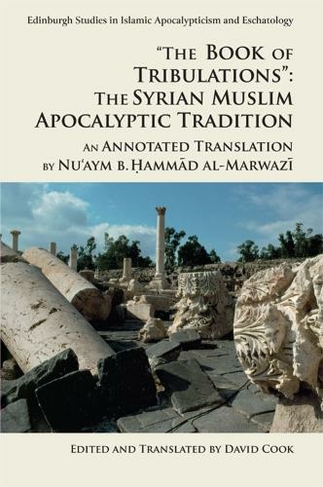 'The Book of Tribulations: the Syrian Muslim Apocalyptic Tradition' An Annotated Translation by Nu'Aym b. Hammad Al-Marwazi

The Book of Tribulations is the earliest complete Muslim apocalyptic text to survive, and as such has considerable value as a primary text. It is unique in its importance for Islamic history: focusing upon the central Syrian city of Hims, it gives us a picture of the personalities of the city, the tribal conflicts within, the tensions between the proto-Muslim community and the majority Christian population, and above all details about the wars with the Byzantines. Additionally, Nu'aym gives us a range of both the Umayyad and the Abbasid official propaganda, which was couched in apocalyptic and messianic terms.

David Cook is Associate Professor of Religious Studies at Rice University, Houston (Texas). He is the author of numerous books including Studies in Muslim Apocalyptic (2002), Contemporary Muslim Apocalyptic Literature (2005), Understanding Jihad (2005) and Martyrdom in Islam (2007).