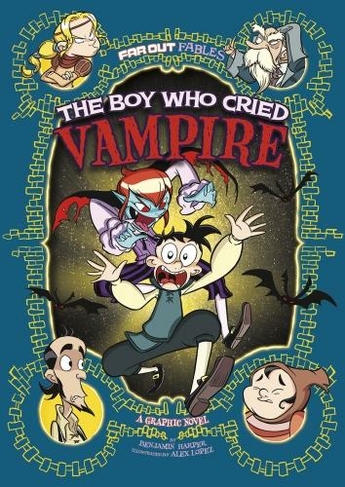 The Boy Who Cried Vampire A Graphic Novel

In Transylvania, a boy cries ... vampire! Young Ion is bored by life in the village. So to spice things up, the imaginative prankster runs false vampire drills, much to the annoyance of the villagers. But one night, a shadow passes by Ion's window. This time it's no joke. It's a REAL vampire! Have all of Ion's fibs come back to bite him, or can the boy find a way out of this batty situation? In this Far Out Fables adventure, Aesop's "The Boy Who Cried Wolf" receives a playful, modern twist. Experience a classic fable like never before in this full-colour graphic novel retelling for kids.

Benjamin Harper has worked as an editor at Lucasfilm LTD. and DC Comics. He currently works at Warner Bros. Consumer Products in Burbank, California. He has written many books, including Obsessed With Star Wars and Thank You, Superman! Alex Lopez is from Sabadell, Spain. He became a professional illustrator and comic-book artist in 2001, but he's been drawing ever since he can remember. Lopez's pieces have been published in many countries, including the United States, United Kingdom, Spain, France, Italy, Belgium, and Turkey. He's also worked on a variety of projects from illustrated books to video games to marketing pieces.