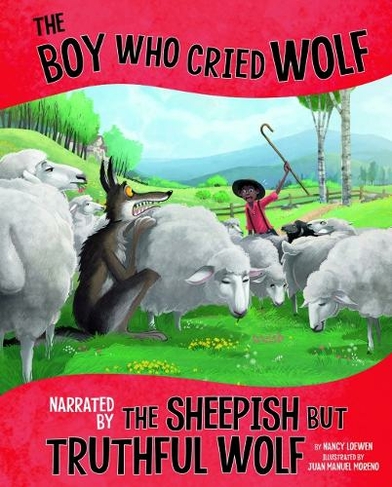 The Boy Who Cried Wolf, Narrated by the Sheepish But Truthful Wolf

So who was really pulling the wool over whose eyes? The Wolf gets candid about "the boy who cried" in this fractured version of a classic Aesop's fable, delighting readers with his first-person account, while back matter questions encourage discussion about perspective. Includes a condensed version of the original tale.

Nancy Loewen has published many books for kids. She's a two-time Minnesota Book Award finalist (Four to the Pole and The LAST Day of Kindergarten) and the recipient of a Distinguished Achievement Award from the Association of Educational Publishers (Writer's Toolbox series). She holds an MFA from Hamline University in St. Paul. Nancy has two children and lives near Minneapolis. To learn more, visit www. nancyloewen.com. Juan Manuel Moreno grew up in Buenos Aires, Argentina. As a young boy, he was drawn to creating images. His first "job" was to color his newborn brother's head with bright felt pens! After studying graphic design, Juan lectured at the university and worked at various studios as an in-house illustrator for clients such as Warner, Disney, and Scholastic. In 2006, Juan and his wife, Patricia, settled in Barcelona, Spain, where he started his career as a freelance illustrator and continues to live today. His work appears in a number of magazines and books, including Cuentos Japoneses [Japanese Stories] and The Secret Series by Pseudonymous Bosch.