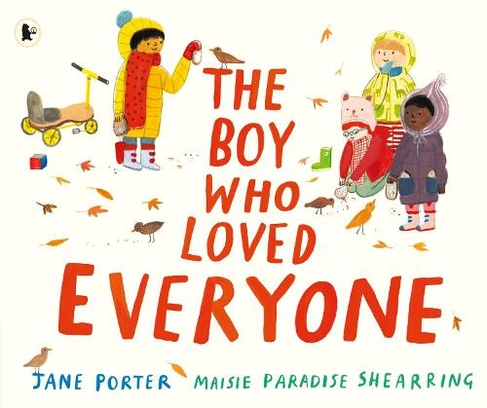 The Boy Who Loved Everyone

A sweet and charmingly illustrated picture book about the ways we express love. "I love you," Dimitri tells everyone, from his friends at nursery to the big tree in the playground. But why does no one say it back? Dimitri worries no one loves him - until he finds out there are lots of different ways love can spread through the world. A touching and uplifting story, perfect for sharing.

Jane Porter is an author and illustrator specializing in work both for and with children. Her work ranges from picture and novelty books to children's maps, murals and hand-made books suitable for outreach work. She has worked for a number of organizations, including the National Trust, English Heritage, London Zoo, the Corporation of London, Historic Royal Palaces and the National Health Service. When she's not working, Jane is often to be found on the River Thames in a coracle or skiff, looking out for passing bats, cormorants and wagtails. Jane lives in London.Maisie Paradise Shearring is an illustrator originally from Hull. Maisie loves drawing, writing stories and making picture books and comics. She studied Illustration at Edinburgh College of Art, graduating in 2013. In 2015, Maisie graduated from Cambridge School of Art with a Distinction in an MA in Children's Book Illustration. In 2015-2016 she was mentored by Nick Sharratt and in October 2015 illustrations from their collaboration featured in a picture book exhibition at the National Gallery of Scotland. In April 2015 Maisie won the International Award for Illustration at Bologna Children's Book Fair. Maisie is a lecturer at Cambridge School of Art on the MA in Children's Book Illustration.