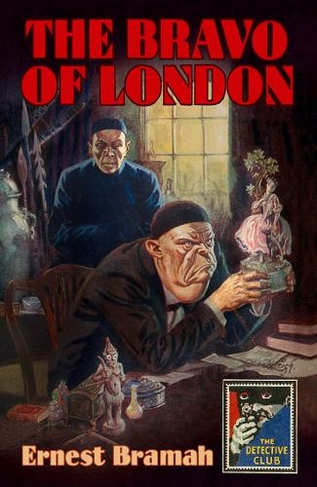 The Bravo of London: And 'the Bunch of Violets' (Detective Club Crime Classics)

The classic crime novel featuring blind detective Max Carrados, whose popularity rivalled that of Sherlock Holmes, complete with a new introduction and an extra short story. In his dark little curio shop Julian Joolby is weaving an extravagant scheme to smash the financial machinery of the world by flooding the Oriental market with forged banknotes. But this monster of wickedness has not reckoned on Max Carrados, the suave and resourceful investigator whose visual impairment gives him heightened powers of perception that ordinary detectives overlook. Max Carrados was a blind detective whose stories by Ernest Bramah appeared from 1914 alongside Sherlock Holmes in the Strand Magazine, in which they often had top billing. Described by George Orwell as among 'the only detective stories since Poe that are worth re-reading', the 25 stories were collected in three hugely popular volumes, culminating in a full-length novel, The Bravo of London (1934), in which Carrados engages in a battle of wits against a fiendish plot that threatens to overthrow civilisation itself. This Detective Club classic is introduced by Tony Medawar, who investigates the impact on the genre of Bramah's blind detective and the relative obscurity of this, the only Max Carrados novel. This edition also includes the sole uncollected short story 'The Bunch of Violets'. As well as on the page, the Max Carrados stories have been a firm favourite on television and film, played over the years by (among others) Robert Stephens, Simon Callow and Pip Torrens, and read on audio by Arthur Darvill and Stephen Fry.

Ernest Bramah (1868-1942) created a sleuth whose popularity rivalled that of Sherlock Holmes: Max Carrados, a blind detective who solves crimes thanks to his extraordinary skills at reading things with his fingers and paying attention to the sounds that other people overlook. Bramah was an extremely private man, who abandoned a career in farming to become a local newspaper correspondent. He moved to London as secretary to the humorist Jerome K. Jerome and did editorial work on several magazines before turning to writing as a full-time occupation, also creating a hugely successful series of books about the itinerant rogue, Kai Lung, set in the lush atmosphere of China and praised by the novelist Hilaire Belloc.