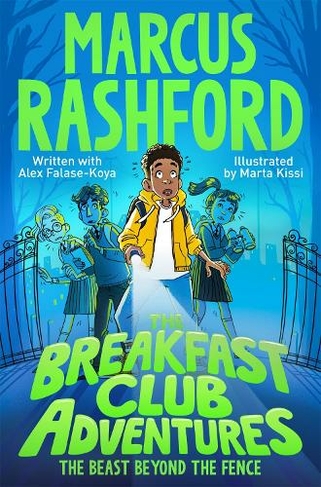 The Breakfast Club Adventures: The Beast Beyond the Fence

Breakfast Club guaranteed I had the best possible start to my day and welcomed me with open arms. It wasn't just about food. It was about forming friendships, about togetherness, about escape. It was where some of my greatest memories were made. I want to capture that feeling in my debut fiction book.' - Marcus Rashford MBE

When twelve-year-old Marcus kicks his favourite football over the school fence, he knows he's never getting it back. Nothing that goes over that wall ever comes back. But the following morning at Breakfast Club, Marcus receives a mysterious note inviting him to join the Breakfast Club Investigators. Among the tasty servings of cereal, toast, and juice, he's soon pulled into an exciting adventure with his new mates to solve the mystery and get his football back!

From international footballer and food poverty campaigner Marcus Rashford MBE is a joyful story of new friendships and adventure. The Breakfast Club Adventures, co-written with Alex Falase-Koya, is Marcus Rashford's first fiction book and is packed with tons of illustrations throughout, perfect for children aged 8-11.

Marcus Rashford MBE is Manchester United's iconic number 10 and an England International footballer. During the lockdown imposed due to the COVID-19 pandemic, Marcus teamed up with the food distribution charity FareShare to cover the free school meal deficit for vulnerable children across the UK, raising in excess of 20 million pounds. Marcus successfully lobbied the British Government to uturn policy around the free food voucher program ? a campaign that has been deemed the quickest turnaround of Government policy in the history of British politics ? so that 1.3 million vulnerable children continued to have access to food supplies whilst schools were closed during the pandemic. In response to Marcus's End Child Food Poverty campaign, the British Government committed 400 million to support vulnerable children across the UK, supporting 1.7 million children for the next 12 months. In October 2020, he was appointed MBE in the Queen's Birthday Honours. Marcus has committed himself to combating child poverty in the UK and his book You Are a Champion, written with Carl Anka, is an inspiring guide for children about reaching their full potential. Marcus's first fiction title, The Breakfast Club Adventures, written with Alex Falase- Koya, will be released in May 2022. Alex Falase-Koya is a London native. He has been both reading and writing since he was a teenager; anything at the cross-section of social commentary and genre fiction floats his boat. He was a winner of Spread the Word?s 2019 London Writers Awards for YA/children?s. He now lives in Walthamstow with his girlfriend and two cats. He is the cowriter of Marcus Rashford's debut children's fiction title The Breakfast Club Adventures.