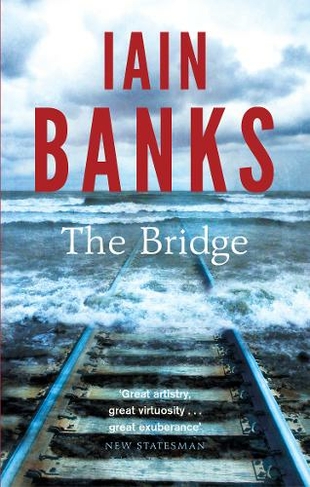 The man who wakes up in the extraordinary world of a bridge has amnesia, and his doctor doesn't seem to want to cure him. Does it matter? Exploring the bridge occupies most of his days. But at night there are his dreams. Dreams in which desperate men drive sealed carriages across barren mountains to a bizarre rendezvous; an illiterate barbarian storms an enchanted tower under a stream of verbal abuse; and broken men walk forever over bridges without end, taunted by visions of a doomed sexuality. Lying in bed unconscious after an accident wouldn't be much fun, you'd think. Oh yes? It depends who and what you've left behind. Which is the stranger reality, day or night? Frequently hilarious and consistently disturbing, THE BRIDGE is a novel of outrageous contrasts, constructed chaos and elegant absurdities.

Iain Banks came to widespread and controversial public notice with the publication of his first novel, THE WASP FACTORY, in 1984. He gained enormous popular and critical acclaim for both his mainstream and his science fiction novels. Iain Banks died in June 2013.