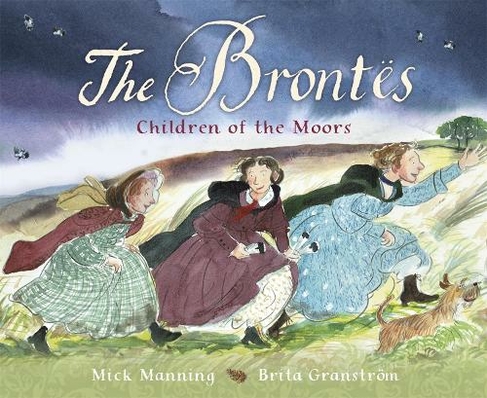 The Brontes - Children of the Moors: A Picture Book (Illustrated edition)

By Mick And Brita Manning And Granstrom (Author)
Paperback
https://www.whsmith.co.uk/products/the-brontes--children-of-the-moors-a-picture-book-illustrated-edition/mick-and-brita-manning-and-granstrom/paperback/9781445147321-12-000.html £7.51 rrp £7.99 Save £0.48 (6%)
GBP
Availability
In Stock
Free Delivery Available When You Spend £25 Or More
Details
Spend £25 on eligible products to receive free standard delivery to home or free next working day click and collect to store
Share

A highly-illustrated retelling of the Bronte sisters life in Haworth in the Yorkshire Dales told from Charlotte Bronte's point of view. Produced to coincide with 200th anniversary of the birth of Charlotte Bronte, this book introduces the three extraordinary Bronte sisters: Charlotte, Emily and Anne. We also meet their brother Branwell. With a mix of strong story-telling and wonderful illustration, Mick Manning and Brita Granstroem relate the sister's tragically short lives in the remote village of Haworth in the Yorkshire Dales. They explore how the girls were inspired to become writers and the sensation their books caused when people realised they had been written by women. Each of the sister's greatest novels, Jane Eyre (Charlotte), The Tenant of Wildfell Hall (Anne) and Wuthering Heights (Emily), are simply retold in engaging comic-strip form. The illustrations and text of this book really capture the life of the children of the moors and how the magic and wildness of their surroundings inspired their work. It is perhaps not surprising as Mick Manning was born and brought up in Haworth and, as a child, even played a shepherd boy in a BBC adapation of Wuthering Heights.

Mick Manning (born in Yorkshire, England, 1959) and Brita Granstroem (born in Eskilstuna, Sweden, 1969) work together as a team sharing the illustration and text. They have been producing award-winning non-fiction picture books for almost twenty years. They show that the best non-fiction for children can be scholarly, albeit with a light touch, and can have some of the imagination-stretching qualities of fiction. They are well known for their exciting performances involving readings and live drawing using overhead camera projection (often involving participation from members of the audience) all mixed with an audio-visual presentation. They appear on a regular basis at major UK book festival venues such as Bath, Cheltenham and Edinburgh International Book Festival. They have appeared at The Royal Society Science Festival and have celebrated The Big Draw at various venues including The Imperial War Museum. They have worked closely to support libraries and schools, performing voluntarily to school classes in the UK and Sweden and have also attended the American Library Conference and visited US schools.Many of Manning & Granstroem's books are translated into a number of languages, including Chinese, German, Greek, Danish, Japanese, Norwegian, Swedish and Slovakian. For the last 12 years Mick & Brita have created, written and illustrated a monthly 5-page gentle pre-school series called 'Max and Kate' for the critically acclaimed US children's magazine Ladybug.http://www.mickandbrita.com Selection of Franklin Watts books:The World Is Full of Babies! (Smarties Silver Award Winner); What's under the Bed? (TES Award Winner); Wash, Scrub, and Brush (English Association Award KS1 Winner); Stone Age, Bone Age and many other Wonderwise titles; How Did I Begin? (Rhone Poulenc Science prize winner); How Should I Behave?; Seaside Scientist; My Body Book; My Uncle's Dunkirk; Charlie's War Illustrated (English Association Award KS2 Winner); The Story of Britain; The Brontes - Children of the Moors.