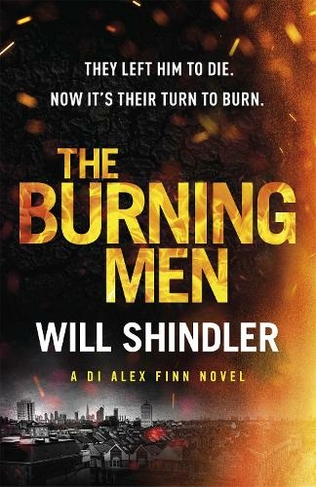 'AN UNMISSABLE DEBUT' - Sunday Express Magazine 'A GRIPPING DEBUT (...) YOU WON'T WANT IT TO END' - Heat THE FIRST IN A PHENOMENAL NEW SERIES FEATURING DI ALEX FINN AND DC MATTIE PAULSEN. Perfect for fans of Mark Billingham, Peter James and Peter Robinson. When a development in South London catches fire mid-construction, a close-knit team of fire fighters runs in to save a man spotted at the window. They come out without a body. They quit the service. They plan never to speak to each other again. Five years later one of them is set alight at his own wedding. Soon after, a second is found, nothing but a smoking corpse. It appears that someone knows what they did that night. What they chose over their duty. And there are still three men left to burn . . . DI Alex Finn and his new partner DC Mattie Paulsen are an unlikely pairing, but they need to discover who is behind these killings before the next man faces the fire. This is first in Will Shindler's Finn and Paulsen series - a British detective series that ranks with Mark Billingham, M.J. Arlidge, Stuart MacBride. REAL READERS ARE LOVING THE BURNING MEN RATED 4.5 STARS ON NETGALLEY 'Well-constructed and cleverly penned, this is one that starts strongly, continues powerfully and ends with a very satisfying bang. It's about consequences, consciences and morals intertwined with some gruesome scenes and a thumping good ride' 'A real page turner. I loved this book. . .There must be more of these two, they are fascinating. More please, equally well thought out, equally well written.............please. SOON!' 'If, like me, you are the kind of reader who likes to be in on the ground floor of a brand-new series, then get The Burning Men on your pre-order to be read lists because this is one of those times...' 'This is a great read about greed and treachery. An engaging, exciting read which I read in one sitting. Lots of red herrings, twists and turns' 'I absolutely loved it, it drew me in from the first page and didn't let go until the end. I cannot wait to read the next book by this author'

Will Shindler has been a Broadcast Journalist for the BBC for over twenty-five years, spending a decade working in television drama as a scriptwriter on Born and Bred, The Bill and Doctors. His time on these leading prime time dramas has given him a rich grounding in authentic police procedure, powerful character development and gripping narratives. He currently combines reading the news on BBC Radio London with writing crime novels and has previously worked as a television presenter for HTV, a sports reporter for BBC Radio Five Live, and one of the stadium presenters at the London Olympics. The Burning Men is his first novel.