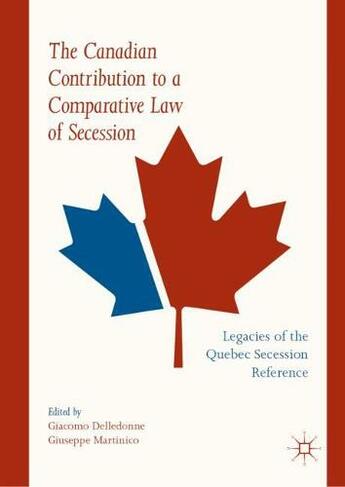 The Canadian Contribution to a Comparative Law of Secession: Legacies of the Quebec Secession Reference (1st ed. 2019)

This edited collection gathers together Canadian and non-Canadian scholars to reflect on and celebrate the 20thanniversary of the Quebec Secession Reference, delivered by the Canadian Supreme Court in 1998. It opens withtwo Canadian scholars exchanging thoughts on the legacy of the reference from a domestic perspective as one ofthe most questioned decisions of the Canadian Supreme Court. To follow, non-Canadian scholars discuss theimpact of this reference abroad, reflecting upon its influence in European and non-European contexts (Spain,Scotland, the EU after Brexit, Eastern European Countries, Ethiopia, and Asia). Two final chapters, one by a lawyerand one by a political scientist, explore the democratic theory behind that reference. 1 Illustrations, black and white; XV, 286 p. 1 illus.

Giacomo Delledonne is a Postdoctoral Researcher in Comparative Constitutional Law at the Sant'Anna School ofAdvanced Studies in Pisa, Italy.Giuseppe Martinico is an Associate Professor of Comparative Public law at the Sant'Anna School of AdvancedStudies in Pisa, Italy. His research interests cover both comparative and European law, fields in which he has publishedextensively, including two monographs in English.