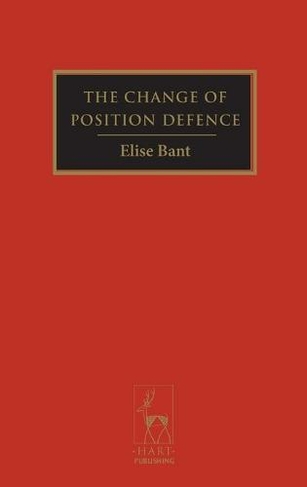 The Change of Position Defence

This book defines and explains the operation of the defence of change of position in Anglo-Australian law. It is a widely accepted view that the defence is a modern development, the first express recognition of which can be traced in England to the seminal decision of the House of Lords in Lipkin Gorman (a firm) v Karpnale Ltd. Commentators have accordingly tended to focus on post-Lipkin case law in discussing the defence and its many disputed features. This work takes a different stance, arguing that the defence is best understood by placing it within its broader historical and legal context. It explains that the foundations of the defence can be found in the related doctrines of estoppel by representation, the agent's defence of payment over and the law of rescission. The analysis applies crucial insights from those areas, together with the change of position authorities and broader considerations of policy and principle, to develop a rigorous model of the change of position defence. The work not only provides a clear and exhaustive examination of the defence, but demonstrates that, properly understood, the defence operates in a rational and justifiable manner within its broader private law context. In so doing, its analysis meets the oft-expressed concern than the defence may operate in an unprincipled way or by reference to 'that vague jurisprudence which is sometimes attractively styled "justice as between man and man"'.

Elise Bant is an Associate Professor of Law at the University of Melbourne Law School and Honorary Fellow (and former Senior Lecturer) at The University of Western Australia.