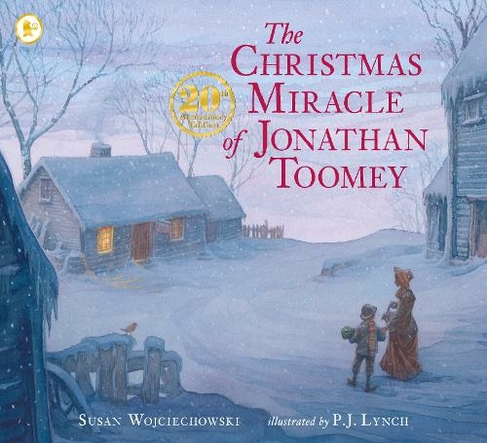 The Christmas Miracle of Jonathan Toomey

The spirit of Christmas heals a sorrowing woodcarver's heart in this stunning 20th anniversary edition of a Kate Greenaway winning festive classic. A stunning 20th anniversary edition of a Kate Greenaway winning Christmas classic, this is the poignant tale of Jonathan Toomey. Although Jonathan is the best woodcarver in the valley, he is always alone and never smiles. No one knows about the mementos of his lost wife and child that he keeps in an unopened drawer. But one early winter's day, a widow and her young son approach him with a gentle request - a request which leads to a joyful miracle. This moving, lyrical tale which unfolds with mastery, humour and emotional force, has been widely hailed by critics and readers as a true Christmas classic, and is gloriously illustrated by the inimitable P.J. Lynch.

Susan Wojciechowski, born in New York, was a children's librarian and schoolteacher for many years before becoming a successful author. Susan is best known for her first picture book, The Christmas Miracle of Jonathan Toomey, which won numerous honours including the prestigious Kate Greenaway Medal, and was adapted into a feature film. About her writing, Susan says, "As a mother, librarian, and former teacher as well as a children's author, I have always felt the need to touch the minds of children. Through my writing, I try to reach children in a special way, by portraying them as real people - warts and all - and showing them that they are more or less alike, despite their differences."P.J. Lynch has won many awards including the Mother Goose Award, the Christopher Medal three times, the Irish Bisto Book of the Year Award, and the prestigious Kate Greenaway Medal on two occasions - first for The Christmas Miracle of Jonathan Toomey by Susan Wojciechowski, and again for When Jessie Came Across the Sea by Amy Hest. In recent years, P.J. Lynch has been commissioned to design posters for Opera Ireland and the Abbey Theatre, as well as designing stamps for An Post. He lives in Dublin with his wife and their three children.