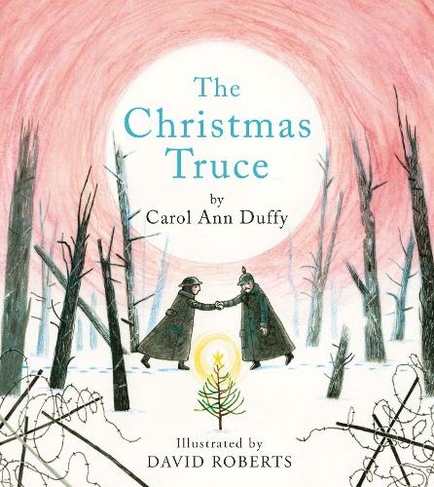 Down at the Front, on a cold winter's night in 1914, amidst the worst war the world had ever seen, an inexplicable silence spread from man to man. Belief was in the air. Then the soldiers ceased fire and the magic of Christmas took hold . . . Carol Ann Duffy's brilliant poem celebrates the miraculous truce between the trenches, when enemy shook hands with enemy, shared songs, swapped gifts, even played football, and peace found a place in No Man's Land. With gorgeous colour illustrations by David Roberts, this special, full size edition of The Christmas Truce is a Christmas gift to treasure.

Carol Ann Duffy lives in Manchester, where she is Professor and Creative Director of the Writing School at Manchester Metropolitan University. Her poetry has received many awards, including the Signal Prize for Children's Verse, the Whitbread, Forward and T. S. Eliot Prizes, and the Lannan and E. M. Forster Prize in America. She was appointed Poet Laureate of the United Kingdom in 2009. Her collections include Mean Time, Love Poems and The Bees, which won the Costa Poetry Award. Her writing for children includes Queen Munch and Queen Nibble, The Skipping-Rope Snake and The Tear Thief. She was made a DBE in the 2015 New Year Honours list. David Roberts has earned great acclaim for his distinctive illustrations. His previous work includes collaborations with his sister Lynn on retellings of several classic fairy stories - their book Little Red was shortlisted for the 2005 Kate Greenaway Medal. In 2006 he won the Nestle Children's Book Prize Gold Award for his line drawings in Mouse Noses On Toast. David's first collaboration with Julia Donaldson - Tyrannosaurus Drip - was published in 2007 by Macmillan, and since then they have worked together on several other picture books, including The Troll, Jack and the Flumflum Tree and The Flying Bath.