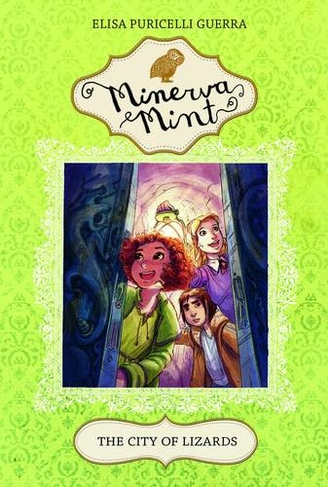 The City of Lizards

Minerva, Ravi and Thomasina are certain that the gold key they found at Lizard Manor will grant them access to the legendary City of Ravagers, the long-ago home of a group of fierce pirates. All they need to do is find the door so that they can search for the ancient treasure of the ruthless crew. But perhaps there's more than riches hidden there. Will the city also shed light on the secret of Minerva's mysterious past?

Elisa Puricelli Guerra was born in Milan, Italy. She always dreamed of becoming a writer (or an astronaut or a witch) and her love of books was born when her mother read the Pippi Longstocking books to her her aloud. Like Pippi, Guerra has red hair - a fact that has caused many problems. She never got away with anything in school, because her flaming read hair always caught the attention of the teachers. As a writer, she often gives the main characters in her stories red hair, too, but she makes them extra clever, so they get away with a bit more than she did. Guerra also works as a freelance writer and translator, but if she could make a living by just reading, that is exactly what she would do! Gabo Leon Bernstein was born in Buenos Aires, Argentina. He studied graphic design at the University of Buenos Aires and comic art at the Garaycochea Art School. In addition to illustrating several international book series, he has worked on character and toy design for television, background design for animation on movies and TV, and editorial illustration for advertising agencies and magazines. The more he struggles to learn how to play the violin, the more he's convinced that visual artwork is his life and passion.