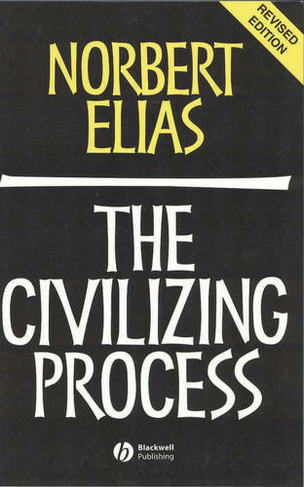 By Norbert Elias (Author)
Paperback
https://www.whsmith.co.uk/products/the-civilizing-process-sociogenetic-and-psychogenetic-investigations-2/norbert-elias/paperback/9780631221616-12-000.html £26.60 rrp £28.00 Save £1.40 (5%)
GBP
Availability
In Stock
With Free Standard Delivery To Your Home Or Store
Details
Spend £25 on eligible products to receive free standard delivery to home or free next working day click and collect to store
Share

The Civilizing Process stands out as Norbert Elias' greatest work, tracing the "civilizing" of manners and personality in Western Europe since the late Middle Ages by demonstrating how the formation of states and the monopolization of power within them changed Western society forever.

Norbert Elias (1897-1990) taught at the University of Frankfurt until his exile from Hitler's Germany. In Britain, he worked at the Universities of London and Leicester, and in retirement was visiting professor in Ghana, Amsterdam, Munster, Bielefeld and many other universities. By the time of his death he was recognized as one of the outstanding social scientists of the twentieth century. His previous Blackwell books include: The Norbert Elias Reader, The Court Society, The Loneliness of the Dying, Involvement and Detachment, Time: An Essay, The Society of Individuals and, with Eric Dunning, Quest for Excitement.