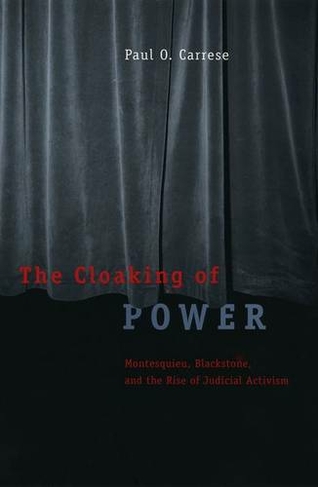 The Cloaking of Power Montesquieu, Blackstone, and the Rise of Judicial Activism 2nd ed.

How did the United States judiciary become so powerful - powerful enough that state and federal judges decided the 2000 presidential election? What consequences does this have for the law, constitutionalism and liberal democracy both in America and internationally. In "The Cloaking of Power", Paul O. Carrese provides a provocative and original analysis of the intellectual sources of today's most powerful judiciary. Carrese argues that Montesquieu, in his "Spirit of the Laws" was the first to articulate a new conception of the separation of powers and the need for a strong and active judiciary. He instructed statesmen and judges to "cloak power" by placing the robed power at the centre of politics, while concealing judges behind citizen juries and subtle reforms. Tracing Montesquieu's conception of judicial power through Blackstone, Hamilton and Tocqueville, Carrese shows how it led to the prominence of judges, courts and lawyers in America today. But he places the blame for contemporary judicial activism squarely at the feet of Oliver Wendell Holmes Jr., and his jurisprudential revolution.

Paul O. Carrese is professor of political science at the United States Air Force Academy. He is coeditor of John Marshall's The Life of George Washington and of Constitutionalism, Executive Power, and Popular Enlightenment. He lives in Air Force Academy, CO.