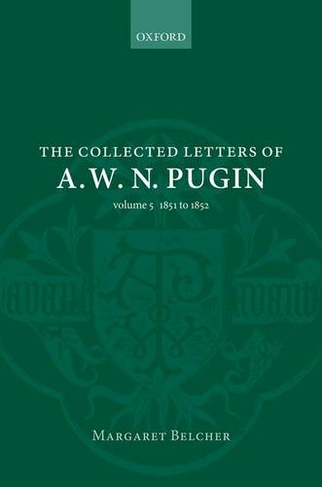 The importance of A. W. N. Pugin (1812-52) in architecture and design in England and beyond is incontestable. The leading architect of the Gothic Revival, Pugin is one of the most significant figures of the mid-nineteenth century and one of the greatest designers. His correspondence furnishes more insight into the man and more information about his work than any other source. This volume, the last of five, contains letters from 1851 and the first months of 1852; after that, Pugin's health failed and he died in September. In the great event of the period, the international exhibition held in the Crystal Palace in Hyde Park, the display of objects made to Pugin's design, which he planned and oversaw, was an outstanding success, bringing substantial commercial benefit to his colleagues and spreading Pugin's influence even more widely than before. The value of his judgment was recognized in his appointment to two committees in connection with the Great Exhibition. Frantic though the preparations for what came to be known as the Medieval Court were, Pugin made time to write for publication. He issued letters and pamphlets in explanation, defence, and support of the Catholic Church and its re-established hierarchy, and turned again to the conundrum that had long teased him, the relation between the faith and the form, not only architectural, in which it found expression. He completed the book on chancel screens conceived some years before. At home in The Grange at Ramsgate, he continued to design stained glass windows, for other architects as well as his own clients, and supervised the production of cartoons; he poured out designs in his usual fields of metalwork, ceramics, furniture, carving, and wallpaper, and branched out, not always happily, into new areas such as embroidery and the decoration of piano cases. The demand for drawings for Westminster, where the House of Commons was due to open early in 1852, was as incessant as ever. His last child, Edmund Peter, was born in 1851 only a few months before his first grandchild, Mildred. Both were baptized in the church of St Augustine which he was still building next to his house and where he himself was soon to be laid in the vault he provided for the purpose. The volume also includes some letters which have come to light too late for inclusion in their proper chronological places and some texts of doubtful authenticity. 4 pages of black-and-white plates; numerous black-and-white halftones