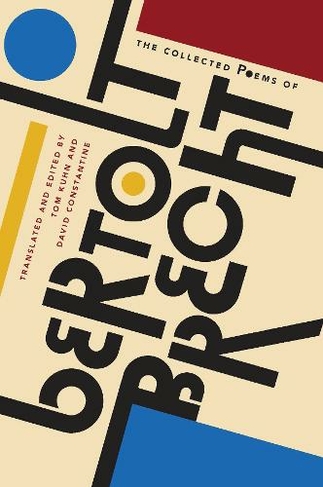 The Collected Poems of Bertolt Brecht

Widely celebrated as the greatest German playwright of the twentieth century, Bertolt Brecht was also, as George Steiner observed, "that very rare phenomenon, a great poet". Hugely prolific, Brecht wrote some 2,000 poems and songs-though fewer than half were published in his lifetime and early editions were extremely selective. Now, award-winning translators Tom Kuhn and David Constantine give us the most comprehensive English collection of Brecht's poetry to date. Written between 1913 and 1956, these poems celebrate Brecht's unquenchable "love of life, the desire for better and more of it" and reflect the technical virtuosity of an artist driven by bitter and violent politics, as well as by the untrammelled forces of love and erotic desire. The Collected Poems of Bertolt Brecht is a monumental achievement and a reclamation.

Bertolt Brecht (1898-1956) was a German poet, playwright, and theater director. In those capacities, and also as a polemical essayist, he contributed powerfully to the chief literary and political debates of his day, and lastingly influenced theatrical theory and practice. He left more than 2,000 poems, assuring him a place among the very best lyric poets of Germany. David Constantine is a freelance writer and translator. His most recent volume of poetry is Elder (2014); his fourth collection of short stories, Tea at the Midland, won the Frank O' Connor International Short Story Award in 2013. Tom Kuhn teaches at the University of Oxford, where he is a Fellow of St Hugh's College. He works on twentieth-century drama and German exile literature and has been, since 1996, editor of the main English-language Brecht edition.