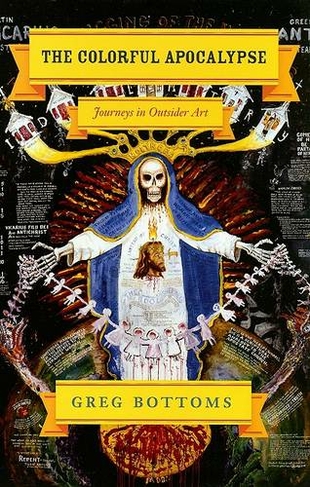 The Reverend Howard Finster was twenty feet tall, suspended in darkness. Or so he appeared in the documentary film that introduced a teenaged Greg Bottoms to the renowned outsider artist whose death would help inspire him, fourteen years later, to travel the country. Beginning in Georgia with a trip to Finster's famous "Paradise Gardens", his journey - of which "The Colorful Apocalypse" is a masterly chronicle - provides an unparalleled look into the lives and visionary works of some of Finster's contemporaries: the self-taught evangelical artists whose beliefs and oeuvres occupy the gray area between madness and Christian ecstasy. With his prodigious gift for conversation and quietly observant storytelling, Bottoms draws us into the worlds of such figures as William Thomas Thompson, a handicapped ex-millionaire who painted a 300-foot version of the book of Revelation; Norbert Kox, an ex-member of the Outlaws biker gang who now lives as a recluse in rural Wisconsin and paints apocalyptic visual parables; and Myrtice West, who began painting to express the revelatory visions she had after her daughter was brutally murdered. These artists' works are as wildly varied as their life stories, but without sensationalizing or patronizing them, Bottoms - one of today's finest young writers - gets at the heart of what they have in common: the struggle to make sense, through art, of their difficult personal histories. In doing so, he weaves a true narrative as powerful as the art of its subjects, a work that is at once an enthralling travelogue, a series of revealing biographical portraits, and a profound meditation on the chaos of despair and the ways in which creativity can help order our lives.