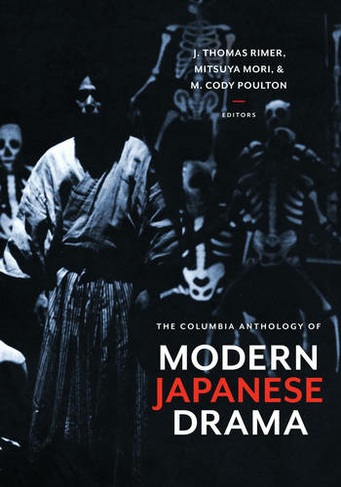 This anthology is the first to survey the full range of modern Japanese drama and make available Japan's best and most representative twentieth- and early-twenty-first-century works in one volume. It opens with a comprehensive introduction to Meiji-period drama and follows with six chronological sections: "The Age of Taisho Drama"; The Tsukiji Little Theater and Its Aftermath"; "Wartime and Postwar Drama"; "The 1960s and Underground Theater"; "The 1980s and Beyond"; and "Popular Theater," providing a complete history of modern Japanese theater for students, scholars, instructors, and dramatists. The collection features a mix of original and previously published translations of works, among them plays by such writers as Masamune Hakucho (The Couple Next Door), Enchi Fumiko (Restless Night in Late Spring), Morimoto Kaoru (A Woman's Life), Abe Kobo (The Man Who Turned into a Stick), Kara Juro (Two Women), Terayama Shuji (Poison Boy), Noda Hideki (Poems for Sale), and Mishima Yukio (The Sardine Seller's Net of Love). Leading translators include Donald Keene, J. Thomas Rimer, M. Cody Poulton, John K. Gillespie, Mari Boyd, and Brian Powell. Each section features an introduction to the developments and character of the period, notes on the plays' productions, and photographs of their stage performances. The volume complements any study of modern Japanese literature and modern drama in China, Korea, or other Asian or contemporary Western nations. 26 b&w photographs

J. Thomas Rimer is emeritus professor of Japanese literature, theater, and art at the University of Pittsburgh. He has also taught at Washington University in St. Louis and at the University of Maryland, and he served for several years as head of the Asian Division of the Library of Congress. He is the author, coauthor, editor, and translator of several works, including The Columbia Anthology of Modern Japanese Literature; Traditional Japanese Arts and Culture: An Illustrated Sourcebook; and A Reader's Guide to Japanese Literature. Mitsuya Mori is emeritus professor of theater studies at Seijo University and the leading expert on Ibsen in Japan. His production of Double Nora, a modern no play based on A Doll's House, was performed at the International Ibsen Festival in Oslo. He is the former president of the Japanese Society for Theatre Research, and his published books and articles include Ibsen's Realism, Comparative Theatre of the East and the West, The Poetics of Theatre, "Problems of Theatre Modernization in the Meiji Era," and "Intercultural Problems and the Modernization of Theatre in Japan." M. Cody Poulton is professor of Japanese language, literature, and theater at the University of Victoria. He is the author of Spirits of Another Sort: The Plays of Izumi Kyoka and A Beggar's Art: Scripting Modernity in Japanese Drama, 1900-1930, and coeditor (with Richard King and Katsuhiko Endo) of Sino-Japanese Transculturation: From the Late Nineteenth Century to the End of the Pacific War. He has been active as a translator of kabuki and modern Japanese drama for both publication and live stage productions in Canada, the United States, the United Kingdom, Ireland, Australia, and Japan.