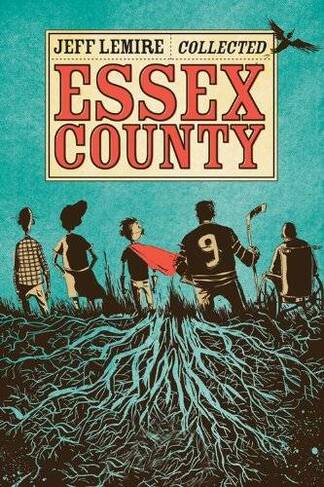 By Jeff Lemire (Author), Jeff Lemire (Artist)
Paperback
https://www.whsmith.co.uk/products/the-complete-essex-county/jeff-lemire/jeff-lemire/paperback/9781603090384-12-000.html £19.20 rrp £24.00 Save £4.80 (20%)
GBP
Availability
In Stock
With Free Standard Delivery To Your Home Or Store
Details
Spend £15 On Eligible Products To Recieve Free Standard Delivery To You Home Or Free Next Working Day Click And Collect To Store
Share

Also available on eBook for £9.19. Click here to purchase from Rakuten Kobo

Where does a young boy turn when his whole world suddenly disappears? What turns two brothers from an unstoppable team into a pair of bitterly estranged loners? How does the simple-hearted care of one middle-aged nurse reveal the scars of an entire community, and can anything heal the wounds caused by a century of deception? Award-winning cartoonist Jeff Lemire pays tribute to his roots with Essex County, an award-winning trilogy of graphic novels set in an imaginary version of his hometown, the eccentric farming community of Essex County, Ontario, Canada. In Essex County, Lemire crafts an intimate study of one community through the years, and a tender meditation on family, memory, grief, secrets, and reconciliation. With the lush, expressive inking of a young artist at the height of his powers, Lemire draws us in and sets us free. This new edition collects the complete, critically-acclaimed trilogy (Tales from the Farm, Ghost Stories, and The Country Nurse) in one deluxe volume! Also included are over 40-pages of previously unpublished material, including two new stories.

Jeff Lemire is a prolific, award-winning comic book writer and artist from Ontario, who's known for creating literary stories depicting the frailties, fears, and hopes of the human condition. He's worked extensively with all the major comic book publishers, penning well-received runs on Animal Man, Green Arrow, Hawkeye, and Old Man Logan for DC and Marvel. His creator-owned works, which are even more highly aclaimed, include The Underwater Welder, The Essex County Trilogy, and Lost Dogs from Top Shelf Productions; Descender, A.D. After Death (with Scott Snyder, ) and Royal City, from Image; and Sweet Tooth, Trillium, and The Nobody from Vertigo. His original graphic novel Roughneck was published by Simon and Schuster in 2017. Jeff won the Joe Shuster Award for Outstanding Canadian Comic Book Cartoonist in 2008 for Essex County, and again in 2013 for The Underwater Welder and Sweet Tooth. He's been a nominee for multiple Eisner awards, a Harvery Award, and the Ignatz Award. Descender and The Underwater Welder have both been optioned for major motion pictures. He lives in Toronto with his family.