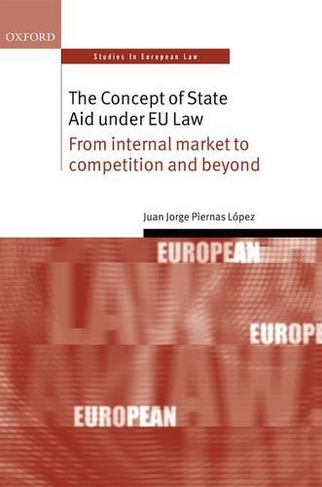 The Concept of State Aid Under EU Law: From internal market to competition and beyond (Oxford Studies in European Law)

How has the evolution and transformation of the Common Market affected the legal concept of State aid? How has State aid adapted to the development of the European Union? These questions and more are answered in Juan Jorge Piernas Lopez's examination of the historical, political, constitutional, and economical events that have affected the development of State aid in the EU. Examining three key, interwoven arguments, this book provides a richer understanding of current formulas which depict the concept of aid through the prism of policy and enforcement considerations. First, the book demonstrates that the concept of aid is a 'living instrument' that has been applied in accordance with the main policy priorities of the European Commission. Second, contrary to what has been affirmed in other literature, the evolution of this concept has been influenced by the broader advancement of the case law of the Court of Justice in different periods of the integration process. Third, the author contends that the study of the evolution of the concept of aid in light of policy and case law provides a holistic outlook valuable to the decision making process of difficult cases. In this regard, the book provides criteria to interpret and discuss cases including Sloman Neptun, Philip Morris, and Azores, beyond the analysis traditionally adopted in this field.

Juan Jorge Piernas Lopez is a Doctor of Laws from the European University Institute in Florence (2013). He formerly graduated from Harvard University (LL.M., Harvard Law School 2007), the College of Europe (Master in Advanced European Studies, Natolin, Poland 2005) and the University of Murcia (Law degree, Spain, 2003). Juan Jorge is currently assistant professor of European Union and International law at the University of Murcia and consultant to the World Bankin State aid matters. He previously worked for the international law firm Cleary Gottlieb Steen & Hamilton, focussing on European Union and Spanish Competition, Trade, and State Aid Law matters (Brussels, 2007-2009), and the European Commission (Stagiare at the Legal Service in 2005 and temporal agent atDG Competition in 2006). Juan Jorge Piernas Lopez has published extensively on International and European Union Law.