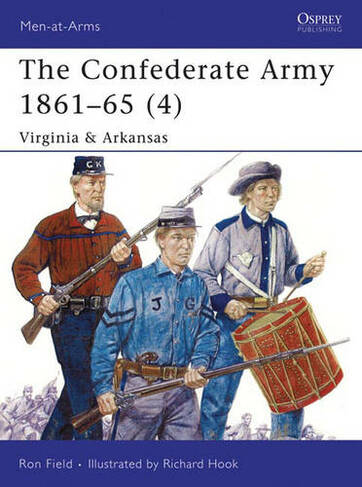 Despite modern perceptions of the overwhelming image of Confederate soldiers dressed in their classic battledress gray, the Southern states which formed the Confederacy in 1861 fielded many units of volunteer troops wearing a remarkably wide variety of uniforms, often reflecting foreign influences. In a spirit of independence, many states also issued their own uniform regulations on the outbreak of the war; and these non-standard uniforms were often retained. This fourth title, part of a series of six titles, studies the archival and pictorial evidence for the infantry, cavalry and artillery of Virginia - the heart of the Confederacy and its richest, most populous and militarily strongest state; and of Arkansas, which despite its much smaller population fielded several interesting units. Illustrations (some col.)

Ron Field is Head of History at the Cotswold School in Bourton-on-the-Water. He was awarded a Fulbright Scholarship in 1982 and taught history at Piedmont High School in California from 1982-83. He was associate editor of the Confederate Historical Society of Great Britain, from 1983-92. He is an internationally acknowledged expert on US military history, and was elected a Fellow of the Company of Military Historians, based in Washington, DC, in 2005. The author lives in Gloucestershire, UK.