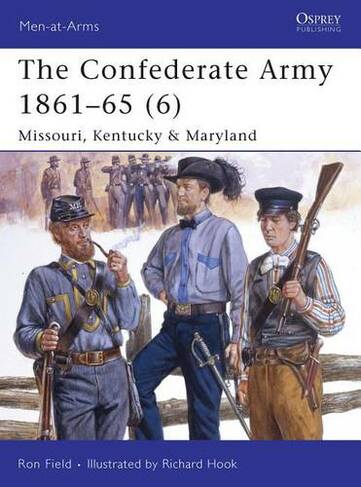 By Ron Field (Author), Richard Hook (Illustrator)
Paperback
https://www.whsmith.co.uk/products/the-confederate-army-186165-v-6-missouri-kentucky-and-maryland-menatarms/ron-field/richard-hook/paperback/9781846031885-01-000.html N/A
GBP
Availability
Currently unavailable. We don't know when or if this item will be back in stock
Free Saver Delivery on orders over £20
Details
FREE SHIPPING over £20 for Saver Delivery
Share

Despite the overwhelming image of Confederate soldiers dressed in their drab butternut and gray, the Southern states which formed the Confederacy in 1861 fielded many units of volunteer troops wearing a remarkably wide variety of uniforms, often reflecting foreign influences. In a spirit of independence many states issued their own uniform regulations at the outbreak of the War Between the States and these non-standard uniforms were often retained deep into the war. The regulation patterns centrally prescribed by the Confederate Army were only ever followed unevenly, and state quartermasters continued to issue uniforms showing regional and state differences. This concluding book in a series of six titles studies the archival and pictorial evidence for the infantry, cavalry and artillery of the states that fought for the South even though they never officially seceded - Missouri, Kentucky and Maryland - and is illustrated with fascinating and poignant early photographic portraits. Previous volumes in the series cover: 1 South Carolina, Mississippi 2 Florida, Alabama, Georgia 3 Louisiana, Texas 4 Virginia, Arkansas 5 Tennessee, North Carolina Illustrations (chiefly col.)

Ron Field is Head of History at the Cotswold School in Bourton-on-the-Water. He was awarded a Fulbright Scholarship in 1982 and taught history at Piedmont High School in California from 1982 to 1983. He was associate editor of the Confederate Historical Society of Great Britain, from 1983 to 1992. He is an internationally acknowledged expert on US military history, and was elected a Fellow of the Company of Military Historians, based in Washington, DC, in 2005. The author lives in Gloucestershire, UK.Richard Hook was born in 1938 and trained at Reigate College of Art. After national service with 1st Bn, Queen's Royal Regiment, he became art editor of the much-praised magazine Finding Out during the 1960s. He has worked as a freelance illustrator ever since, earning an international reputation particularly for his deep knowledge of Native American material culture; and has illustrated more than 50 Osprey titles. Richard Hook lives in Sussex, UK.