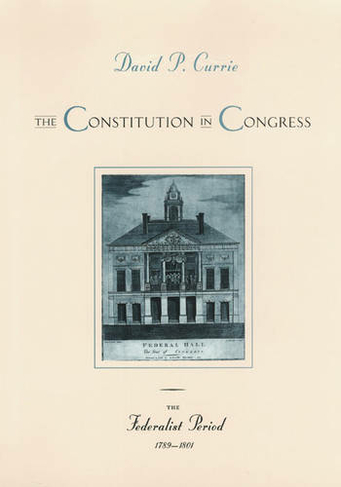 This is an examination of the US constitution, providing an analysis from a legal perspective of the first six congresses constituting the federalist period. The book aims to establish that the Constitution was forged, not in the courts, but in the legislative and executive branches of government. The first half of the book is devoted to the work of the First Congress, which was virtually a continuation of the Constitutional Convention, setting up the executive cabinet departments, the judiciary, a taxation system, and a host of other institutions. The second part of the book examines the Second to the Sixth Congresses, where partisan battles arose over such controversial initiatives as the Alien and Sedition Acts.

David P. Currie (1936-2007) was the Edward H. Levi Distinguished Service Professor of Law at the University of Chicago. He is the author of four volumes in the Constitution in Congress series and the award-winning two-volume history The Constitution in the Supreme Court.