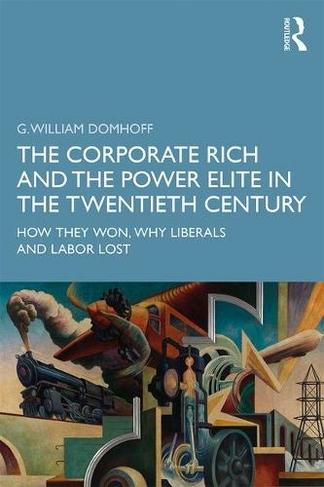 The Corporate Rich and the Power Elite in the Twentieth Century How They Won, Why Liberals and Labor Lost

The Corporate Rich and the Power Elite in the Twentieth Century demonstrates exactly how the corporate rich developed and implemented the policies and created the government structures that allowed them to dominate the United States. The book is framed within three historical developments that have made this domination possible: the rise and fall of the union movement, the initiation and subsequent limitation of government social-benefit programs, and the postwar expansion of international trade. The book's deep exploration into the various methods the corporate rich used to centralize power corrects major empirical misunderstandings concerning all three issue-areas. Further, it explains why the three ascendant theories of power in the early twenty-first century-interest-group pluralism, organizational state theory, and historical institutionalism-cannot account for the complexity of events that established the power elite's supremacy and led to labor's fall. More generally, and convincingly, the analysis reveals how a corporate-financed policy-planning network, consisting of foundations, think tanks, and policy-discussion groups, gradually developed in the twentieth century and played a pivotal role in all three issue-areas. Filled with new archival findings and commanding detail, this book offers readers a remarkable look into the nature of power in America during the twentieth century, and provides a starting point for future in-depth analyses of corporate power in the current century.

G. William Domhoff is the author or co-author of 16 books on the American power structure, four of which appeared on a list of the top-50 best-sellers in sociology from the 1950s through the early 1990s, including his now-classic, Who Rules America? He is a Distinguished Professor Emeritus in Sociology and remains active as a Research Professor at the University of California, Santa Cruz. Who Rules America? was published in a revised and updated version in 2014 and has been in print and used in many classrooms for 52 years.