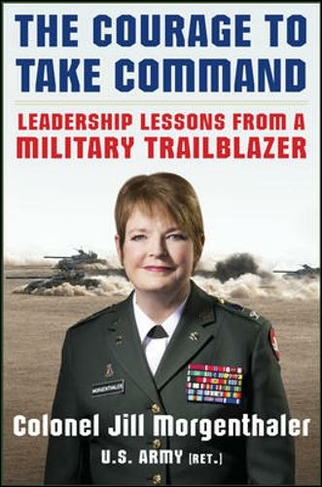 The Courage to Take Command: Leadership Lessons from a Military Trailblazer

Also available on eBook for £17.27. Click here to purchase from Rakuten Kobo

POWERFUL LEADERSHIP LESSONS FROM A TRAILBLAZING FEMALE COLONEL IN THE U.S. ARMYWhen Jill Morgenthaler arrived at boot camp in 1975 as part of the inaugural class of women in the Army, she was one of 83 female cadets . . . on a base of 50,000 men. So she knows a thing or two about conquering obstacles. In The Courage to Take Command, ColonelMorgenthaler provides invaluable leadership lessons drawn from her three decades of military service--from her first days in ROTC to combat in some of the world's most dangerous war zones. Ironically, the military taught her that leadership isn't about "command and control." Rather, it requires a fine balance of reason and emotion, distance and familiarity, hard and soft power. Learn how to lead your team to success by: Being true to your vision--but being open to new ideasTackling obstacles head-on--but using finesse to arrive at solutionsFocusing on the mission--while protecting your peopleProjecting strong leadership presence--but serving every member of your team, especially the weakest and most vulnerableMaintaining team spirit--but refusing to tolerate mediocrityAccepting and embracing your fears--but never letting them control youAlways having a plan--but also trusting your gutExpressing a healthy self-confidence--with a side of humility It took both a spine of steel and a smart sense of people for Morgenthaler to get where she did. Now she draws on the wisdom garnered from her experience to help you develop an authentic brand of leadership and succeedat all levels of any organization. The Courage to Take Command provides the strategies and tactics you need to follow through with your leadership vision, inspire your team, and execute your mission-evenwhen the odds may seem overwhelming. 15 Illustrations, unspecified