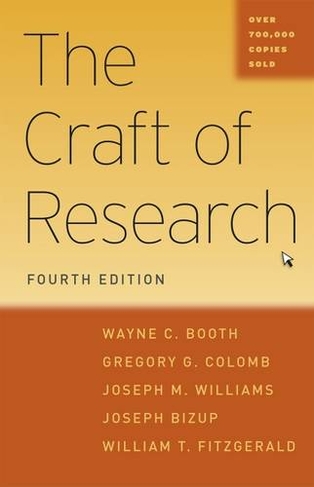 The Craft of Research: (Chicago Guides to Writing, Editing and Publishing 4th edition)

With more than three-quarters of a million copies sold since its first publication, The Craft of Research has helped generations of researchers at every level from first-year undergraduates to advanced graduate students to research reporters in business and government learn how to conduct effective and meaningful research. Conceived by seasoned researchers and educators Wayne C. Booth, Gregory G. Colomb, and Joseph M. Williams, this fundamental work explains how to find and evaluate sources, anticipate and respond to reader reservations, and integrate these pieces into an argument that stands up to reader critique. The fourth edition has been thoroughly but respectfully revised by Joseph Bizup and William T. FitzGerald. It retains the original five-part structure, as well as the sound advice of earlier editions, but reflects the way research and writing are taught and practiced today. Its chapters on finding and engaging sources now incorporate recent developments in library and Internet research, emphasizing new techniques made possible by online databases and search engines. Bizup and FitzGerald provide fresh examples and standardized terminology to clarify concepts like argument, warrant, and problem. Following the same guiding principle as earlier editions that the skills of doing and reporting research are not just for elite students but for everyone this new edition retains the accessible voice and direct approach that have made The Craft of Reasearch a leader in the field of research reference. With updated examples and information on evaluation and using contemporary sources, this beloved classic is ready for the next generation of researchers.