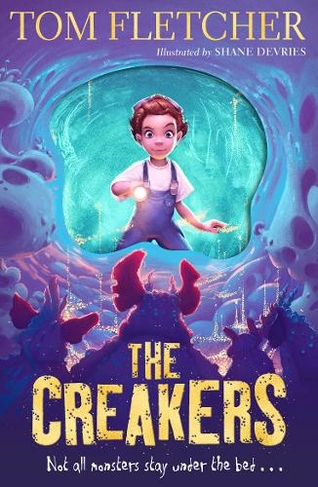 A creepy, spooky and (just a little bit) yucky adventure from Tom Fletcher, bestselling author of The Danger Gang and The Christmasaurus! Lucy Dungston has woken up to find all the grown-ups in her town have disappeared. Lucy's friends are thrilled there are no more grown-ups. They're running wild! They're building roads of trampolines, and eating cereal for every meal. But Lucy wants her mum back, and nothing is going to stop her. Even if it means having to venture into the strange, upside-down world of the mysterious monsters under her bed! And the upside-down world isn't the most hygienic of places . . . __________ Tom Fletcher's bestselling story is packed with amazing illustrations by the disgustingly talented Shane Devries. Praise for The Creakers: 'A stonkingly good novel for the over-sevens . . . gleeful descriptions of malodorous underworld creatures, it's both a compelling adventure and a nuanced celebration of friendship and family love' The Guardian 'The illustrations are stunning and the storyline is full of twists and great ideas' R Patterson, Toppsta Reviewer '10 out of 10 bum trumps!' Guff the Creaker

Tom Fletcher (Author) Tom Fletcher is a number one bestseller and one of the UK's most popular children's authors. The Christmasaurus was the biggest debut middle-grade novel of 2016 and was shortlisted for a British Book Award, since then Tom has published several more chart-topping children's novels including The Creakers, The Christmasaurus and the Winter Witch and the instant number one bestseller The Danger Gang. Tom also writes the incredibly successful Who's in Your Book? picture book series, and is one half of the author duo behind the Dinosaur that Pooped picture book series too, which has sold over 1.5 million copies. For older readers, Tom co-authors the Eve of Man series with his wife Giovanna Fletcher. Tom's books have been translated into thirty-three languages and to date he has sold over 2.5 million copies of his books in the UK alone. He is also a music-making, song-writing, guitar-playing, Guinness World Record-holding, nappy changing, galaxy-defending dad!Shane Devries (Illustrator) Shane Devries is an illustrator from Adelaide, Australia. He began working as an architectural illustrator and has worked as a graphic designer and now creates visual development art for animation productions and illustrates books. Shane enjoys visiting art galleries, running and travelling and if possible he would spend countless hours gardening in his veggie patch.